Skip to content
UniEnergy Technologies » AGM Battery VS Deep Cycle: What Are The Differences? 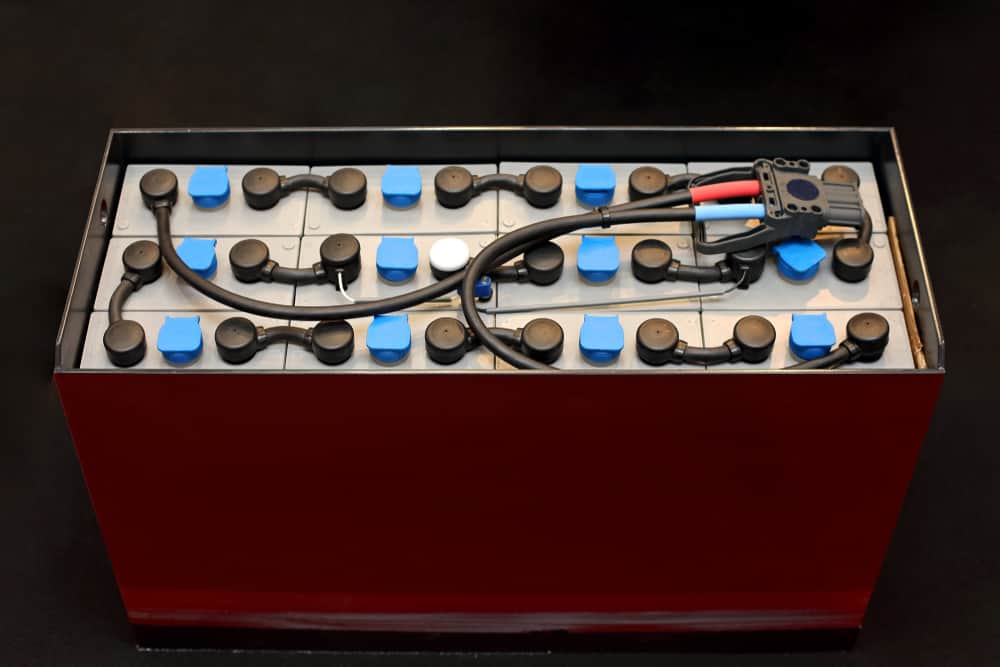 No matter the make and model, vehicles use either an AGM battery or a deep cycle battery, but what’s the difference between the two?

While the most common type is the deep cycle or flooded lead acid battery, In this article, we’ll be reading how these battery lineups stack against each other and related information to help you choose the most workable option for your vehicle.

The Absorbent glass mat or AGM batteries are an improved version of the traditional deep cycle or lead acid batteries. Besides getting familiar with the differences, you’ll surely learn the similarities as we scroll through the text.

The elemental composition of both batteries is the same as they have identical electrolyte liquids made of sulfuric acid and water and lead plates for the chemical reaction to occur. Oxygen and hydrogen gases are produced by-products during the reaction.

However, their working mechanism still has some differences. While the lead acid battery vents out the gases, AGM batteries don’t produce many gases because of the unavailability of free-flowing electrolytes.

While no hydrogen is generated, the chemical reaction in the battery does produce oxygen that is reabsorbed at the negative plate.

It contains lead plates immersed in electrolytes. The gaseous by-products are vented out, resulting in water loss. Therefore, the electrolyte solution depletes over time and needs to be replenished regularly.  As a general rule of thumb, the evaporated electrolyte liquid levels can be replenished by adding distilled water.

Besides having the same lead plates and electrolyte liquid, these AGM deep cycle batteries have fiberglass mats placed between the plates. These mats keep the liquid suspended and prevent it from free-flowing inside the battery.

AGM batteries are sealed lead acid batteries that produce gases recombined with the electrolyte solution. If excess gases are made, there’s a vent to release the gases and lower the internal pressure.

The AGM battery has a better build quality and is more durable than the deep cycle battery. The fiberglass mats sandwiched in the lead plates are snugged in, making the battery shock and vibration-resistant.

This durability and resistance make the AGM battery a top pick in motorsports. Deep cycle batteries, on the other hand, can get damaged if they are not mounted securely. 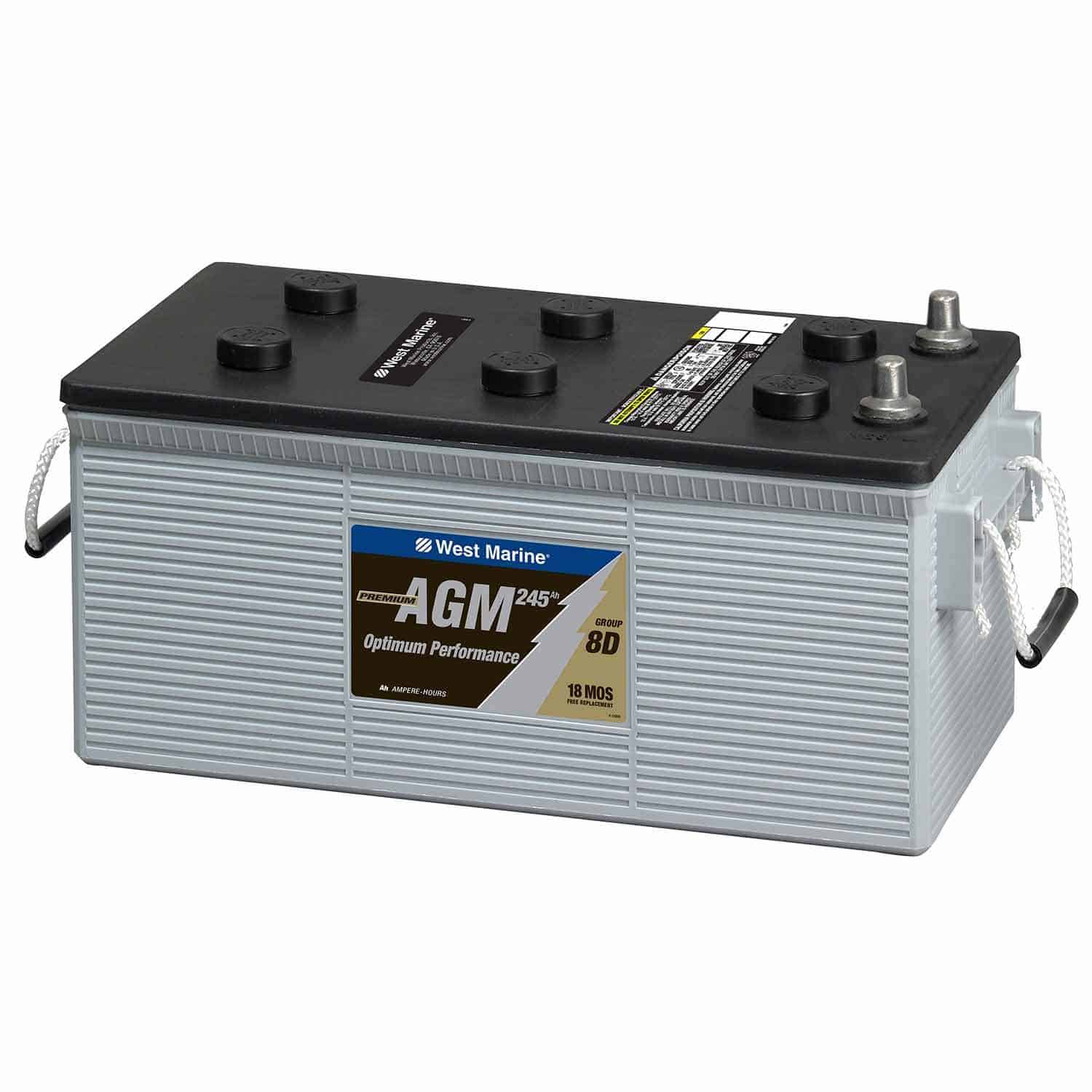 AGM batteries produce little to no gassing, making it a feasible choice for vehicles with battery enclosures in places like the trunk, below the driver’s seat, or any other area that’s hard to reach.

In contrast, a deep cycle battery needs its electrolyte solution to be kept at optimum levels and in a well-ventilated space to release the gases produced.

The AGM battery is spill-proof and can be installed in almost any configuration except by turning it upside down. However, the deep cycle battery has a free-flowing electrolyte solution that needs to be kept upright to prevent spillage.

6. Charging Time And Depth Of Discharge

A flooded lead acid battery charges slower than an AGM battery. This happens due to the increased internal resistance interfering with the charging.

However, both types of batteries cannot be discharged below 50%, unlike the lithium-ion battery type, which can be discharged completely.

The lead-acid battery is more tolerant to overcharging than an AGM battery. Overcharging the AGM or SLA batteries (sealed lead-acid) shortens their lifespan and leads to a thermal runaway. Using a regulated battery charger is recommended for SLA batteries to control the amps and volts and achieve faster charging.

Typically, AMG batteries work better at different temperatures than deep-cycle batteries. A lead-acid battery will freeze in cold temperatures, resulting in the plates expanding and the battery’s case cracking and leaking.

In contrast, the AGM or SLA battery is resistant to cold weather and won’t crack or leak. Likewise, one extreme heat, the electrolyte solution in deep cycle batteries will evaporate, leading to poor performance.

A typical lead-acid battery lasts from 3 to 5 years, whereas the SLA battery can survive up to 7 years. The low self-discharge rate of the AGM battery makes it a superior choice to flooded batteries.

Corrosion affects the conventional deep-cycle battery more, leading to spills and leaks. Sulfation affects both battery types when not used for extended periods.

Regular maintenance and a timely visit to the service center can keep issues like corrosion at bay. These issues affect the efficiency and performance of the battery.

When comparing both batteries, AGM batteries are safer. These batteries are tolerant of changing temperatures, provide a longer run time, can handle heavy loads, and are durable enough to be used in extreme environments. Your AGM battery won’t spill the electrolyte or get cracked.

The lead-acid battery is cost-effective, while the AGM counterparts are three times the cost.

Comparing The AGM Battery With Other Deep Cycle Battery Types

Lithium-ion batteries have already replaced many batteries and are used in deep cycling applications, just like the AGM battery. While the AGM has an 80% DoD, the li-ion battery can be discharged entirely without affecting the output or performance.

The lithium-ion battery can be charged and discharged 10,000 times when comparing cycle life, while an AGM lasts 500 charging and discharging cycles.

Taking Care Of Your AGM Battery

As it’s evident from the comparison that each battery type has its pros and cons. While the lead-acid battery is cost-effective, they are not as efficient as the AGM.

In a nutshell, the AGM or SLA battery would be an excellent choice if you’re looking for performance and durability without worrying about the price tag. However, a lead-acid battery will suffice if you need a simple car starter battery.