Skip to content
UniEnergy Technologies » 11 Reasons Why Alternator is not Charging Battery (Fixed!!!) 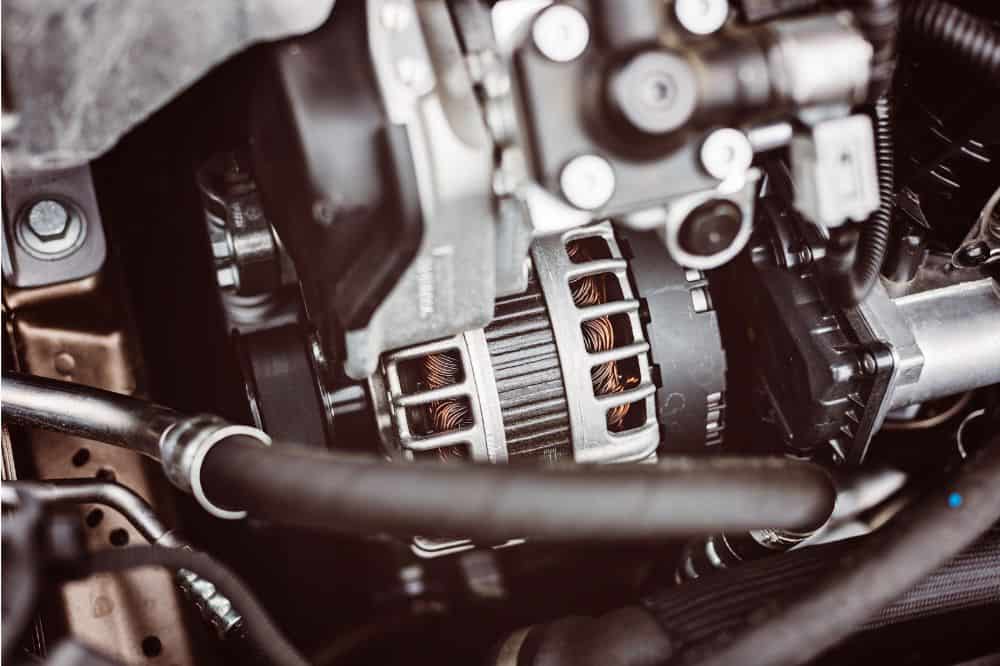 Has your car battery ever failed to charge even when it’s new? How did you know the alternator had a problem, and how did you solve it?

An alternator is your car’s power plant. Besides charging your car battery as you drive, it powers up your devices like the radio.

It can fail to charge your car, and you’ll see it before or during a trip. You can examine your vehicle, know the source of the problem, and solve it.

So, in this article, you’ll learn why your alternator is not charging the battery. We also provide solutions to fix these issues.

Reasons Why the Alternator isn’t charging the Battery

Below are the aspects that make your alternator not charge your battery. You’ll also know the signs to help you know if the alternator isn’t working.

1. Corrosion from the Battery Terminals

The chemical or foam corrodes the terminals and doesn’t allow them to conduct power. You’ll find the elements in a greenish, bluish, or whitish color.

Such an event happens to an old battery, overcharging the battery, or because of gas or acid leakage. Sometimes, when severe, it can kill the battery fast.

Though it is a minor cause, oil spillage can affect your alternator over time. While filling up your oil, it can splash into the alternator.

As your car goes for a few miles, the oil will spread to the inner parts of the alternator. After that, the oil sticks, attracting much dust, which clogs the alternator.

Once parts like the brushes clog, the alternator won’t perform well. Expect it to give less or zero power to the battery.

An alternator fuse can blow up as you start the car or during a trip. It comes because of an excess power surge or being old.

You’ll find the problem in your car’s fuse box. In the box, you’ll find that some fuses aren’t powering up some alternator elements.

If it happens, there won’t be a current flow from the alternator to the battery. Sometimes, the surge can burn the power cables.

Such a cause should be the first thing to ring in your mind, especially when starting the car. The two items, the alternator, and the battery, work together to light up your vehicle.

Your battery could be old or have technical issues. So, it won’t take power from the alternator.

A car can run using an alternator. But it will cause a significant danger to your vehicle.

Also, your battery will use more power quickly if the alternator dies. You’ll see this sign well when you jumpstart the car. The engine will start but, later on, shut down after some seconds or minutes.

Sometimes, you won’t be able to start the car. Your battery won’t have any charge, and the alternator also can’t give it power.

Most modern cars have a smart ECU. You can monitor it through the dashboard.

The ECU helps you run and manage your car’s parts, including the alternator. But if there’s any error with this part, the alternator can also fail to work.

When the ECU fails, the car’s battery will drain, the engine will stall many times, or the car won’t start. A wrong command from the ECU is enough to stop the alternator from charging.

6. Poor Jumpstart of the Car

Using another car to start your engine is excellent. But it will be bad news if you don’t do it well.

A bad jumpstart comes when you mismatch your cables. So, there are chances that the event will burn your alternator. It can also fry your car’s accessories.

When you jumpstart the car and fail, the alternator has some faults. But the starter motor is weak when the engine doesn’t crank, and the headlights light up.

An alternator without a belt and pulley will never run. The serpentine belt can fail because of a crack or being old.

Also, the item will not work well if you over-tighten it. Though cars have tensioners to make the belts flexible, it is always safe to tighten them well.

When the belt is not in the proper state, your car’s accessories won’t work well. Also, you’ll hear some rattling or whining noises. Such sounds come from the belt’s bearing not being in excellent health.

8. Fault in the Voltage Regulator

Without this item, your car’s regulator won’t have proper power flow. It is because a regulator maintains a particular charging voltage.

So, once it fails, your battery can’t get power. Sometimes, it can even blow the accessories and wires in the car.

Your car’s lights will keep becoming dim or over bright. The sign becomes more visible once you remove your pedal.

It is because the regulator isn’t working quite well. When you test the battery, it will have a very high voltage of over 13.7 V. It will get too much power from the alternator.

9. Burn Out and Leaks from Diodes

Your alternator won’t charge the battery if the diodes have a burnout. They’ll die because of overheating, poor wiring, or electrical overload.

Most of the time, one or two diodes may fail, and the others keep changing power flow. It will become worse once you load your car.

The car will need more power. But the few diodes will convert fewer currents and die out.

Also, the lights dim or go off once the items leak. You’ll know that the diodes are leaking when you use a voltmeter.

Like any other electrical device, batteries and alternators never last forever. How long your alternator will last will vary with your usage and care.

You can use your alternator for 80,000 miles in 7 years. If it hits this range, the alternator can fail to charge.

Once the alternator has some issues, it will make weird noises. It can rattle and create a high-pitched or knocking noise.

A car with faults in the wiring system is dangerous. It can cause much damage, including to the alternator. If you ignore the problem, it can burn your car.

Every wire’s position is vital. If one of the cables breaks or you don’t fix it well, the alternator won’t charge the battery.

Best Ways to Fix an Alternator that isn’t Charging Battery

The above alternator problems shouldn’t worry you. Your car still has more chances to serve you. So here are the top ways to deal with an alternator that isn’t charging:

Ensure you replace the item if you have the right skills. Otherwise, let your mechanic do the hustle for you and get the correct alternator for your car.

Getting a new alternator varies with your car model. Your car’s battery won’t charge if you pick the wrong one.

Use your previous alternator to see the correct part number. Also, beware of fake batteries on the market today.

2. Get a New Battery

Before getting a new battery, check on the battery’s current and voltage using a multimeter. If the voltage is low, below 8 V, get a new one.

The old one won’t hold power for long hours. Go for a battery of around 12V when full.

Also, pick a battery that can hold your car’s needs. It prevents issues of regular battery drains. You’ll worry less about the battery losing charge on your trips.

Never solve an ECU error on your own if you lack the skills. It’s safe to let your mechanic check and correct the mess.

You can also check for the trouble codes using an OBD2 scanner. It helps you know any faults in your system.

If you are on a low budget, it’s better to replace the whole ECU. The more minor repairs in these parts will cost you more dollars. But it will depend on your car model.

Once you notice that your fuses are dead, get your mechanic to replace them for you. Remember, it is better and cheaper if you can handle the matter.

Check the same dead fuse and replace it with the correct one. Today most cars come with an extra fuse that is smaller with a 15A to 20A range.

The smaller fuse will serve you for a short time before you get the main one. Remember, the vast fuse that merges with the big power cable has a voltage of 80 A.

When placing a new alternator belt, please be careful if the car has a manual tensioner. Double-check them after the tightening.

You should worry less if the belt and pulley are the problems. Replacing an alternator is cheap and easy.

Ensure you get a genuine one that fits your car. It saves more replacement costs in the future.

You can fix this element by changing the output on the regulator. Each type has its way of changing the levels.

But if the regulator is dead, replace it. Let your mechanic handle the process. In some cars, you’ll have to replace the whole alternator.

Before that, ensure you get the best voltage regulator that fits your car. It’s the best way to avoid future costs on the regulator.

Ensure that they aren’t warm when in their proper position. You’ll need your car’s wiring diagram to help you.

Also, all cables should be clean and with no cracks. It allows a smooth power flow in the whole charging system.

Please use a multimeter to test the wire’s voltage. All cables, around three to four, should have a voltage of 12 V. But ensure your battery charge is complete.

8. Clean Your Battery Terminals and Regulator

Removing dust and other spills on the terminals and regulator is great. If you do it well, there will be a smooth power flow.

The process is easy and cheap. Get a pro to open up the alternator and clean it well.

As for the oil spill, you must separate the parts for a proper clean-up. If the oil spillage is too much, you’ll have to replace it.

All alternator diodes should function for a smooth current flow. So, if one or more diodes fail, ensure you replace them.

Use a multimeter to test if the diodes are in great shape. As the engine runs, place the meter probes on the battery terminals. If the diodes are great, they’ll have zero voltage.

Don’t rush in jumpstarting a car if you aren’t sure how to do it. Though it is not a complex task, let a pro do it for you.

Remember, your car’s charging system can die if you don’t follow the correct steps. Such damage comes from the power surge. So, your alternator may fail to handle it.

Alternators and batteries partner to make sure every part of your car works. If the alternator fails, your battery and car won’t function well.

Your car will show various signs that the alternator is dead or almost dead. The most common one to hear will be rattling noises.

Such noises say a lot about the state of the alternator’s inner parts and the belt. It can also be because of a dead fuse or poor wiring. Give your car proper care, and all shall be well.

Which sign and reason have ever been present on your alternator? How did you solve the issue? Please share with us.