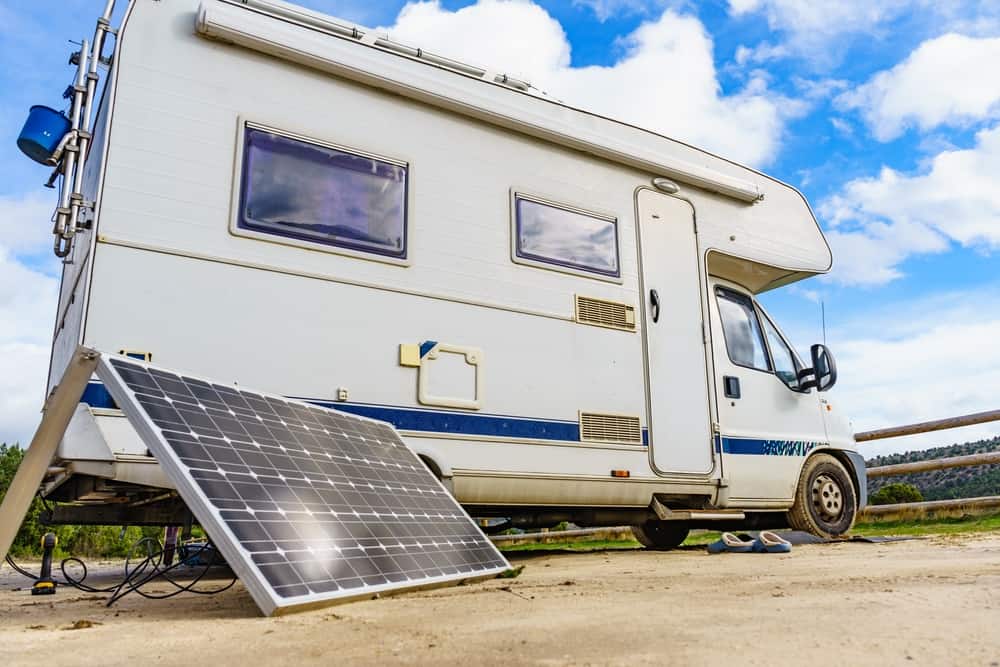 A motorhome or camper is a dream for many. Enjoying the comforts of a conventional home with the added freedom of travel and movement provided by a vehicle. It has many benefits compared to traditional camping, where some added creature comforts are lacking.

One of those is access to electricity, which enables you to have your electric lights, cooking, heating, vent fans, a water pump for running water, entertainment, and any additional appliances and electrical devices that can run on the system in your RV.

How Does Camping With Electricity Work?

Almost all motorhomes today have a built-in power storage system that allows for off-grid access to electricity.

This battery bank powers the “home” part of the RV and, as such, is known as a house battery. It differs from the battery used to power the engine’s starter, also known as the chassis battery.

What Types of Batteries Can Be Used to Power an RV? 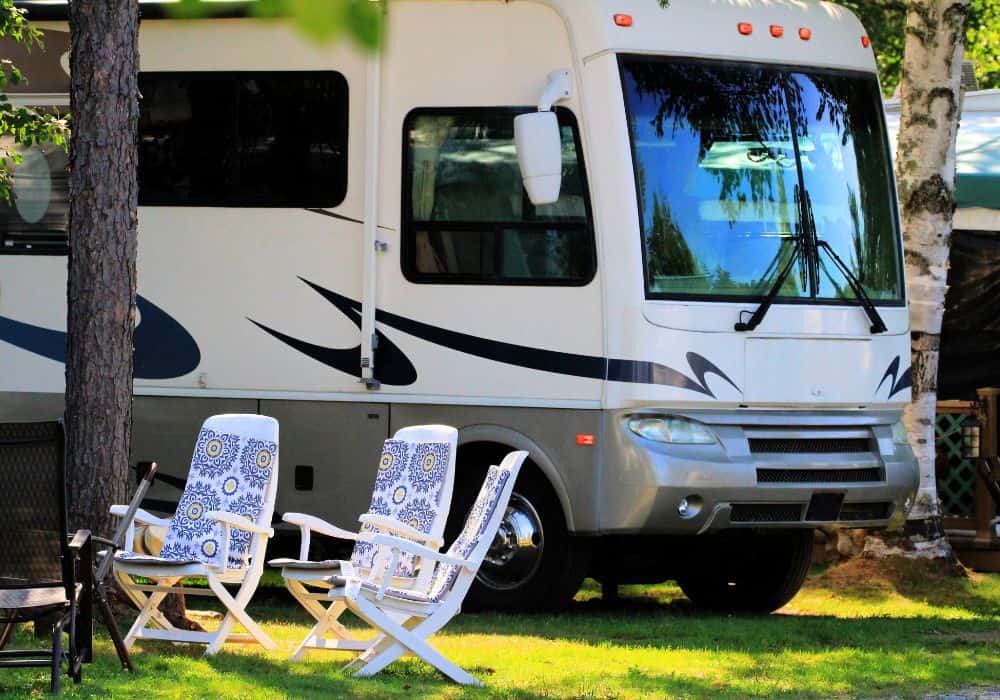 There are four main types of house batteries:

Deep cycle batteries are batteries designed to be regularly deeply discharged using most of their capacity. The term is traditionally used for the large and heavy lead-acid batteries used in automobiles.

They are similar in shape, size, and function to car/chassis batteries, which, by contrast, are designed to deliver only a tiny part of their capacity in a short, high-current burst for cranking the engine.

AGM batteries or absorbed glass mat batteries. They used to provide power such as motorcycles, military aircraft, submarines, etc. Nowadays, you can see them in everyday vehicles.

AGM batteries are an almost maintenance-free alternative to flooded lead-acid batteries. They are made to provide intense bursts of starting amps and can run electronics for extended periods.

Lithium batteries, also known as lithium-ion (or Li-Ion), are rechargeable batteries that use the reversible reduction of lithium ions to store energy. It is the predominant battery type used in portable consumer electronics and electric vehicles.

Gel batteries are VRLA batteries with a gelled electrolyte; sulfuric acid is mixed with fumed silica, which makes the resulting mass gel-like and immobile.

Compared to their standard counterpart, flooded wet cell lead-acid batteries, they need not be kept upright to function correctly.

All of these come in direct current 12-volt batteries, which is standard for all motorhomes, but they can be used to power 120-volt a/c appliances if your rig is equipped with a nifty device known as an inverter.

Methods You Can Use for RV Battery Charging 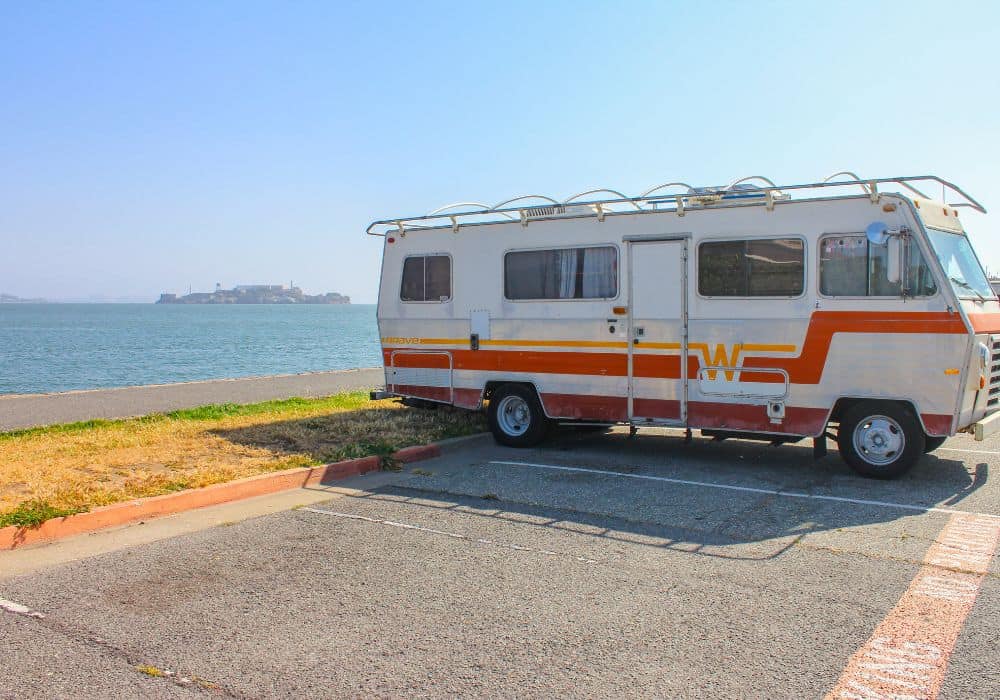 In this section, we will go over some methods you can use to charge the house batteries in your RV, ranging from the ones everyone knows to some less conventional ones.

Most models of motorhomes/RVs should automatically charge the house batteries as you are driving down the road because the manufacturer designed the vehicle so that the engine’s alternator is also hooked up to the house batteries.

There are two central systems that RV manufacturers use: a BiRD (Bi-directional Relay Delay) or an echo charger.

An echo charger takes some of the charging currents from the chassis battery (once it nears a full charge) and supplies it to the house battery system. It can be additionally installed as an aftermarket feature if your RV already didn’t come with one.

Echo chargers are also known as dc chargers because they charge one DC battery with the power of another.

If your motorhome is of the travel trailer type, you must connect its electrical system to the tow vehicle’s alternator using a seven-pin connector cord.

As you probably guessed, shore power is somehow related to the sea, and that’s because this method was initially used to power and charge ships and yachts docked at ports, but it is now used to charge RVs at campgrounds, and trucks also use it.

You see this when you drive by a campground for motorhomes and see that they’re all plugged into an electrical system.

This system works because it takes in 120 volts of AC power from the campground or an electrical outlet, and the RV converts the original power and voltage into 12 volts of DC power using a converter to charge the battery and power appliances.

You can keep using the electricity from a shoring system as long as you are plugged in instead of using the power in your batteries.

There are three main types of shore power, depending on the size of your rig and the electrical devices it has.

Each type uses a specific connector; for instance, 30 A uses a connector with three long prongs, and 50 A uses a four-pronged connector. Typically, most campgrounds will offer shore power for all three types.

A couple of suitable accessories to have are shore power adapters and a surge guard. The adapters allow you to connect to a different type of shore power outlet if the one your RV uses is not available.

Surge guards are used to protect the electrical system of the RV from any power surges that could damage it.

3. Charging with a generator

Many motorhomes have a built-in generator that can be used to charge the house batteries. Frequently, the on/off switch for the generator is located inside the cabin of your motorhome. A generator can charge your batteries just like shore power would.

If your motorhome does not have an onboard generator, you can use any store-bought portable generator and put it in your RV’s storage space, so you have it in case of an emergency.

The only downside to a generator is that it cannot run any appliances since its power output limits it.

Considering that you could not run many appliances with your generator would be best. At the same time, the batteries are low, so if you are considering using a microwave oven, ensure the generator has charged your batteries a substantial amount first. 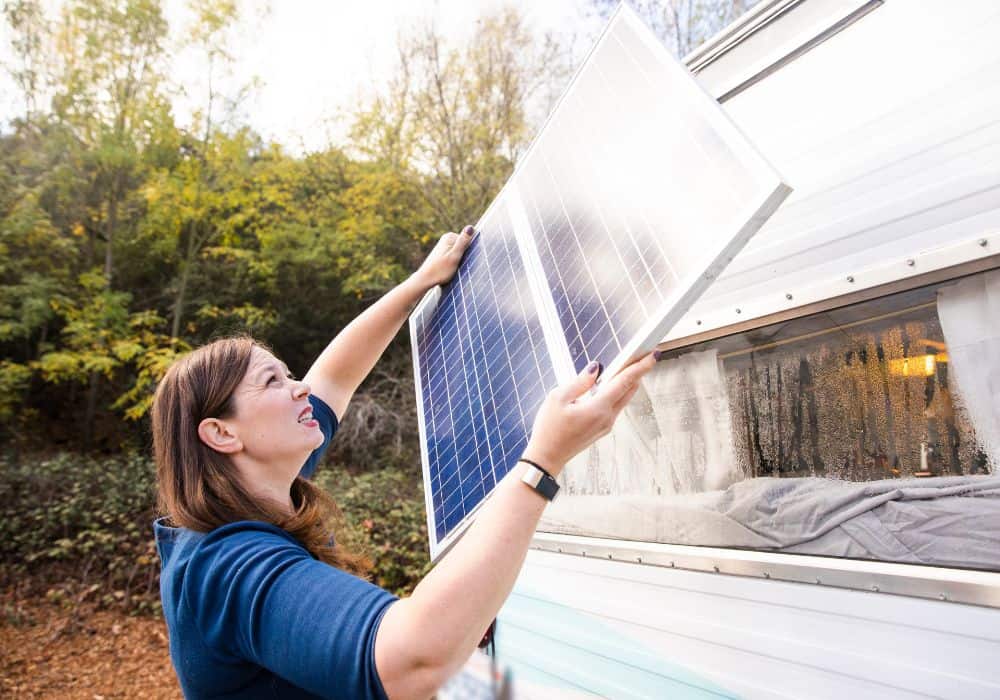 It has become a common trend for RV owners to add solar panels to their vehicles’ roofs to supply power to their appliances.

You can use solar power by adding permanently fixed solar panels to your RV’s roof or by having portable solar panels stored inside the vehicle, which you take out and use whenever you see that there is plenty of sunlight.

One thing to consider if you are going to add this system to your rig is to ensure that you have an adequate solar battery charge controller. That regulates how much power is going to your batteries because too much force can lead to overcharging and damage.

Wherever you decide to travel with your motorhome, it is wise always to have a few of these methods at the ready because you never truly know when you will have to rely on one of them to get you out of a sticky situation.

Another reason to have multiple options at the ready is to choose which one is the most economical or suitable for your needs and not have to rely on just one that could potentially fail.