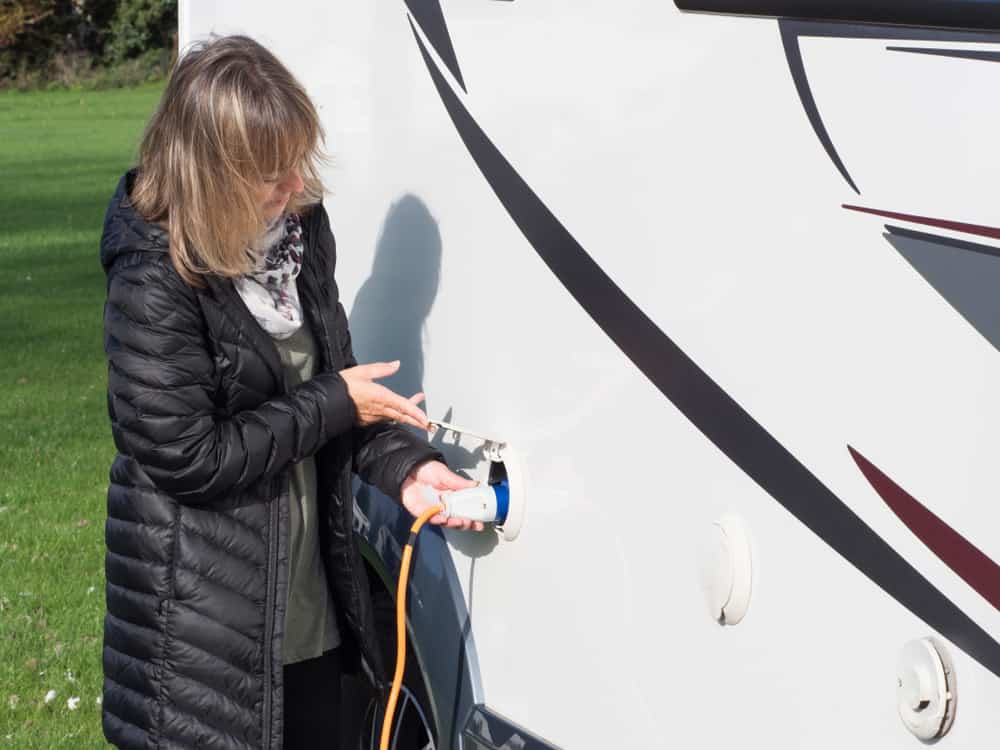 As you know, one of the main features of an RV is that it allows you access to electricity for your appliances and electronics while “off-grid,” so to speak. This power is available because your RV has a compartment carrying its battery bank.

So let us say that you are looking either for an upgrade to your existing battery bank or you are going to work on an RV restoration or conversion project, and you do not know what kind of batteries to get.

There are several different types of batteries that you can choose from. Depending on what you are looking for, any of these can be the ideal choice of RV house battery for you, so let us dive into it. 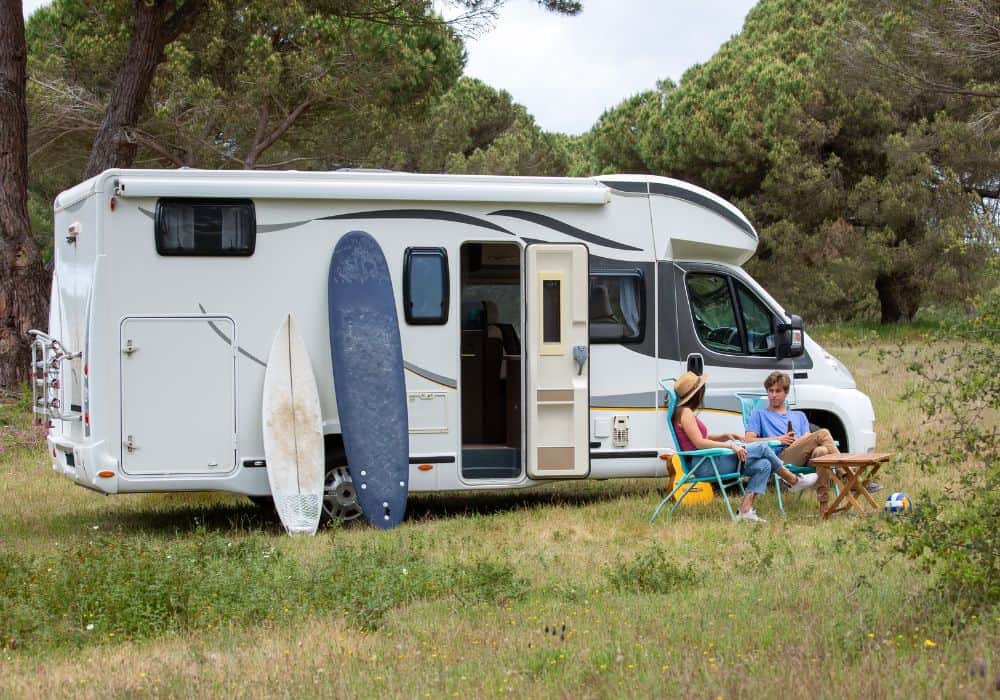 Before we get into this topic, we should be aware that the batteries we will discuss are not the ones we see powering our vehicle engine, known as chassis batteries.

Yes, one of the house battery types we will mention is technically the same type of battery as chassis or starter batteries, but there is a crucial difference.

Starter batteries are meant to expend much of their power quickly, like a strong push or sprint. In contrast, RV house batteries are intended to give a continuous and almost constant amount of energy, like a marathon.

Because of this, we say that the house batteries in our campers and RVs are deep-cycle 12-volt batteries. They are regularly discharged almost completely. Some also come in the form of a 6-volt battery.

On the other hand, their starter battery counterparts, which spend only 1/4-1/3 of their total power, do so in a brief period and are recharged by the vehicle’s alternator after they have turned the engine on.

Another important thing we must make a note of is how the power of each battery is measured. For this, we use a specific measurement called amp hours (or AH for short) which tells us how much energy a battery can give out in an hour.

Now that we have gotten that out of the way let us get into the topic of what kind of house batteries you can get for your RV or travel trailer.

The four different types of battery – An in-depth analysis 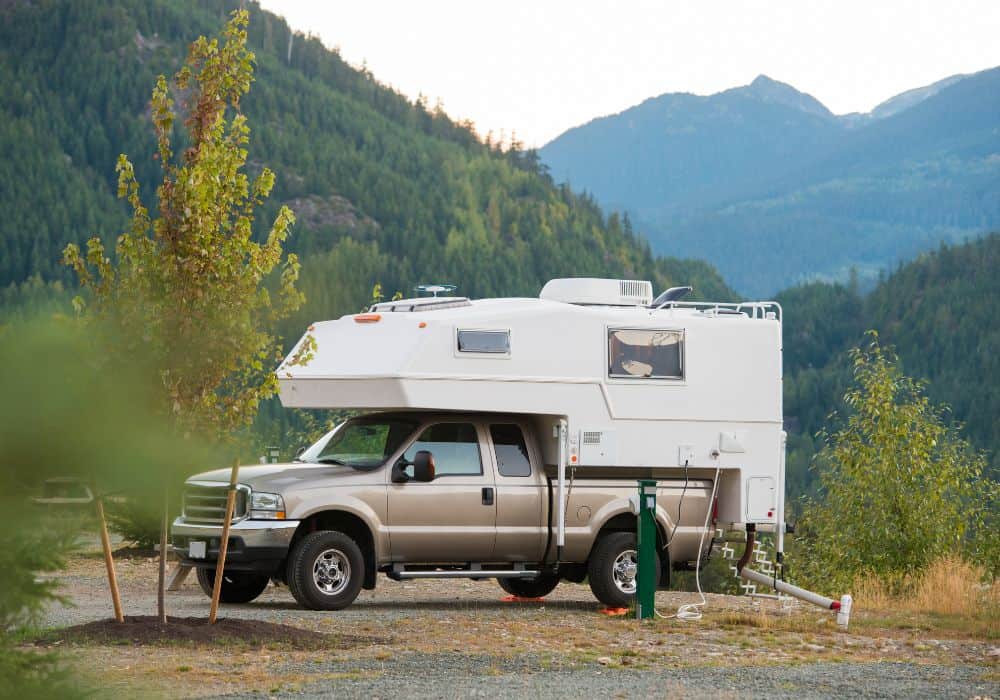 Flooded electrolyte batteries or wet cell batteries are a term that usually applies to a battery known as a flooded lead-acid battery. It is considered the oldest rechargeable battery design and one of the simplest and cheapest power storage systems.

This type of battery is almost the same as the starter batteries we mentioned above, and the differences we explained previously apply precisely to this kind of battery.

This battery type works because a reaction happens between the lead and lead dioxide plates and the sulfuric acid in the battery, which causes a flow of excess electrons that generates a flow of electrical current. Hence the name flooded lead-acid battery.

These batteries are going to be the cheapest among all of your options simply because the technology is the simplest, and they are widespread in use.

Bear in mind that the acid in these batteries is diluted with distilled water. Therefore, it needs to be topped off from time to time due to gassing, where some water is lost. Topping applies to non-sealed batteries only.

What you must watch out for is sulfation, a process in which sulfuric crystals collect on the inside of the electrodes of the battery, and the fact that these batteries can leak sulfuric acid vapor and hydrogen gas, which can cause corrosion to the surrounding area.

Sulfuric acid vapor and hydrogen gas leaks occur when the battery is overcharged or stored without a full charge. It also happens in the ambient temperature is above 75 degrees Fahrenheit, and typically they can only be stored or used in the up proper position to prevent any fluid leaks.

So what are the specifications of these batteries, and how much do they cost?

Typically, they are relatively inexpensive and last a decent amount of time with proper care and maintenance. They go for around $100 more or less per battery while still having decent AH ratings, making them the cheapest option on this list. 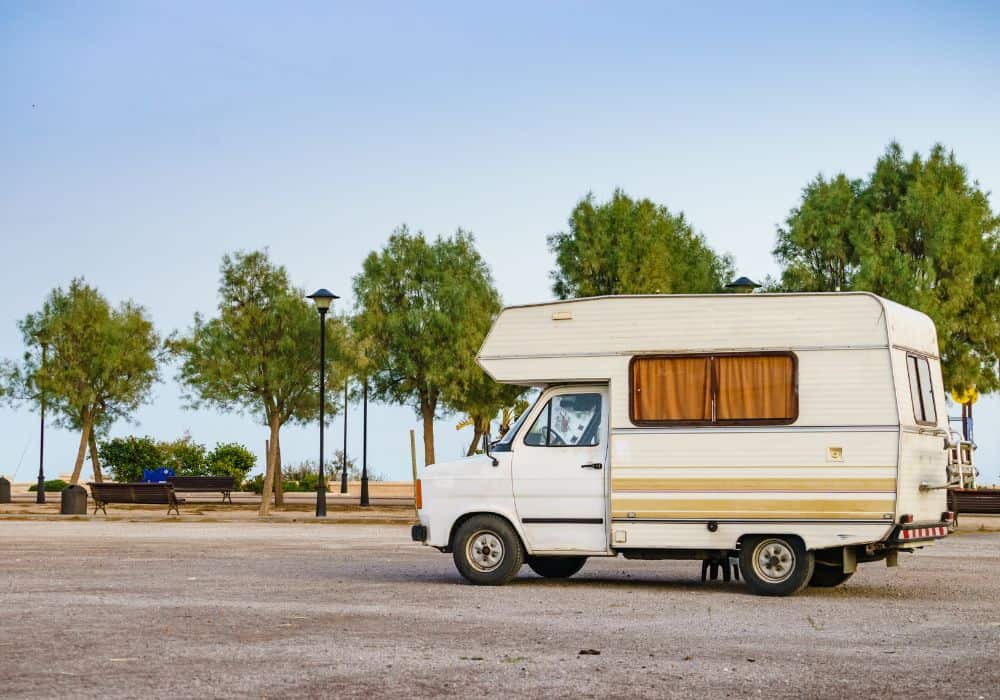 AGM batteries or absorbed glass mat batteries are still lead-acid batteries at their core. Still, they differ from them in that inside, they have a glass mat between the electrodes and it prevents the acid from flowing freely and prevents things like sulfation.

Another key difference is that they do not need to be stored in an up proper position as these batteries are completely sealed shut, which means they are virtually maintenance-free.

A great advantage these batteries have is that they can operate in below-freezing temperatures, some even up to 40 degrees below zero, but they do need to be at 60% charge to avoid any damage in the long run.

Keep in mind, these batteries are sensitive to overcharging, so you have to be mindful to make your new purchase.

A disadvantage they also have is that they are the heaviest batteries on this list, weighing in at more than 50 pounds, and as such, they have the lowest energy density.

As for their price, this is also a downside, as they can cost several hundred dollars per battery, as shown here, where the cheapest one is around $300, whereas some of the more expensive models can go up to $700.

Gel batteries get their name because their electrolyte mixture is a gel-like substance composed of sulfuric acid mixed with fumed silica, and as such, the mixture is immobile and gel-like.

They possess some critical advantages over types, such as being very water resistant and durable when it comes to damage from vibrations, all while having outstanding performance, making them quite desirable and practical in the maritime industry.

A disadvantage that they have is that they must be charged slowly and at a lower voltage to prevent overcharging, so due to this reason, many shy away from using these batteries.

Their price can range anywhere from $150 to 500 dollars depending on the model and AH capacity.

RV lithium-ion batteries are the newest design in this list and are arguably the most widespread in use today. One can find them in almost every household, be it in a laptop or electric car batteries, so naturally, they are an excellent choice for this application.

A critical advantage of RV lithium batteries is that they can maintain an almost constant voltage even at a 90% depth of discharge.

On the flip side, other battery types will progressively deliver lower voltage with more discharge. Unfortunately, many of these batteries are not even meant to discharge, as much as this is due to the likelihood of them suffering catastrophic damage.

Lithium batteries are usually quite pricey for RVers. Still, in recent years a new type of lithium battery has been developed called the lithium iron phosphate battery, which is cheaper because it uses less expensive materials than its predecessors.

Lithium batteries are an excellent choice for this application because of their high energy density and low maintenance requirements. However, they will require a battery management system (BMS for short) to protect them from overcharging.

On the other hand, lithium phosphate batteries can last up to 10000 cycles of use, so they are more of a long-term investment than anything else.

The main downside to Lithium phosphate batteries is that they are sensitive to cold temperatures, which can harm their overall performance and lifecycle. Still, there are batteries on the market with self-heating systems installed.

When it comes to the choice of the best RV battery type, it will depend mostly on your own needs, requirements, and budget. However, the best battery type for most RVers will be a lithium battery.

Because of their reliability and low, low needs, and overall performance, most will see the price of these batteries as a worthwhile investment that will pay off in the long run and serve their needs for years to come.