Skip to content
UniEnergy Technologies » What Does The Date On A Car Battery Mean? (Ways To Decipher) 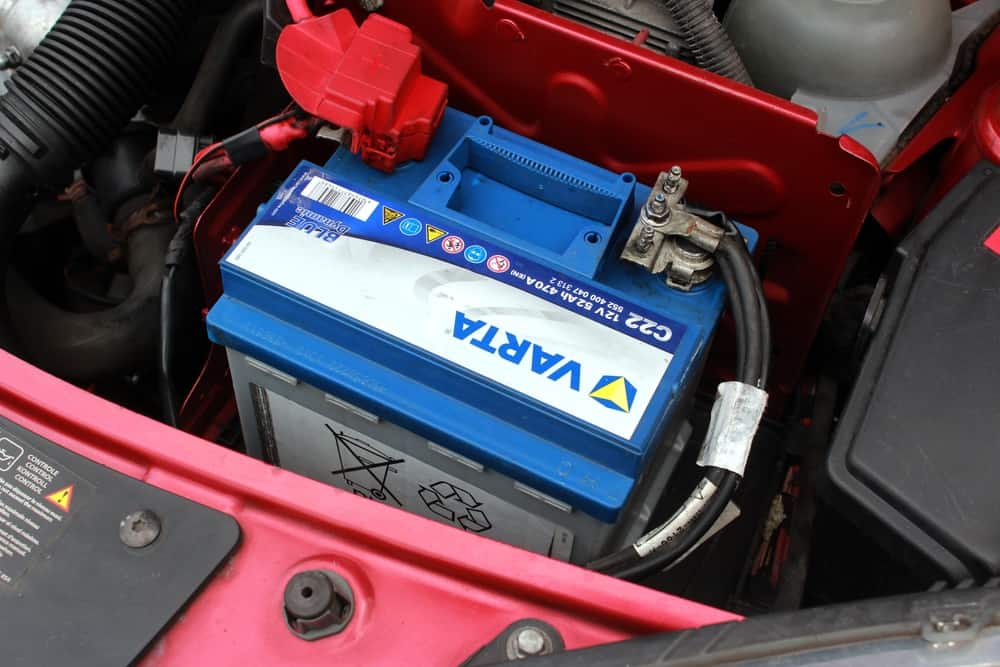 Knowing the exact age of your car battery is crucial for maintaining the battery’s health but it’s also often a bit tricky. If you don’t know exactly when the car was first sold or the battery was manufactured, you’re going to have to consult with the complicated codes on top of the battery itself. Those can be a bit complicated to read, however.

So, let’s look into what does the date on a car battery mean and how to decipher it. We’ll cover the main few methods in which car battery date codes are written as well as how else you can try and determine your car battery’s age if you’re not certain you’re reading the code right.

What does the date on a car battery mean?

The date on most car batteries typically only indicates the year and month of manufacture. There are some models that also specify the day of the month but those are rare as the exact day is typically irrelevant.

Even the month doesn’t matter as much as the year of manufacture as what we usually want to know is how old – in years – the battery is. Still, the month is important too in that regard as the difference between a battery made in January 2015 and a battery made in December 2015 is basically almost a full year.

What the date on a car battery doesn’t indicate, however, is any form of “expiration date”. That’s because the manufacturer can’t really know when the battery is going to expire – that depends on how often you use it, how exactly you use it, how well you take care of it, and a ton of other additional environmental factors such what the temperature and air humidity are where you live, and so on.

What we do know, however, is that most car batteries tend to have a life span of 3 to 5 years or, more broadly, 2 to 7 years, depending on how poorly or how well well you care for it.

So, if you’re looking for an approximation of an expiration date, just look for the date of manufacture and calculate the age of the battery – if it is around or above 5 years, it’s likely nearing its expiration and you should consider getting a replacement battery soon.

Different date formats and where to find them

All car battery manufacturers are expected to place the car battery’s manufacture date somewhere on top of the battery. The exact location can differ – on the battery cover, near the terminals, or elsewhere, but it’s always on the top side of the battery so that it’s easily visible – here’s an instructional video, for example.

Merely finding the date format on the battery is the easy step, however, as reading and deciphering the code can be more complicated. For starters, there are two basic ways a battery’s manufacture date can be displayed – 1) on a date sticker or a stamp, or 2) in a longer alphanumeric code that can be in the form of a heat stamp, an engraving, or a strip.

If your car battery has a simple sticker with the date on it, you can consider yourself lucky. The digits on such a sticker should be very easy to read as they will have a very clear date format, usually along the lines of “2/17”, i.e. February 2017.

On such stickers, the first number should always be the month and the second – the last digit of the year. Alternatively, the month can be displayed as a letter in the A to L range – A meaning January, B – February, C – March, D – April, H – August, and so on until L – December. Here’s what they usually look like.

The problem with stickers, however, is that they can sometimes get damaged as they are just paper, after all.

The second method for displaying a manufacture date is by including it in a longer code somewhere on top of the battery. This can be confusing at first, as such a code rarely looks like a date. On the other hand, as such a code is often engraved or heat-stamped, it’s more durable.

And, for a bit of extra confusion, the exact way to decipher the date from the code can vary depending on the battery manufacturer and model. We’ll list the four main ways a date can be displayed on a battery code – if you’re not sure which applies in your case, look up your car battery’s model online or look at its manual.

More often than not, the first character of the code will be a number, and the second – a letter between A and L. In that case, the number would indicate the year, and the A-L letter would mean the month, as is often the case on stickers.

The fact that only a single number represents the year can be confusing at first but keep in mind that car batteries almost never last close to 10 years. So, whatever the year number is, it relates to the last year that ended with such a number. 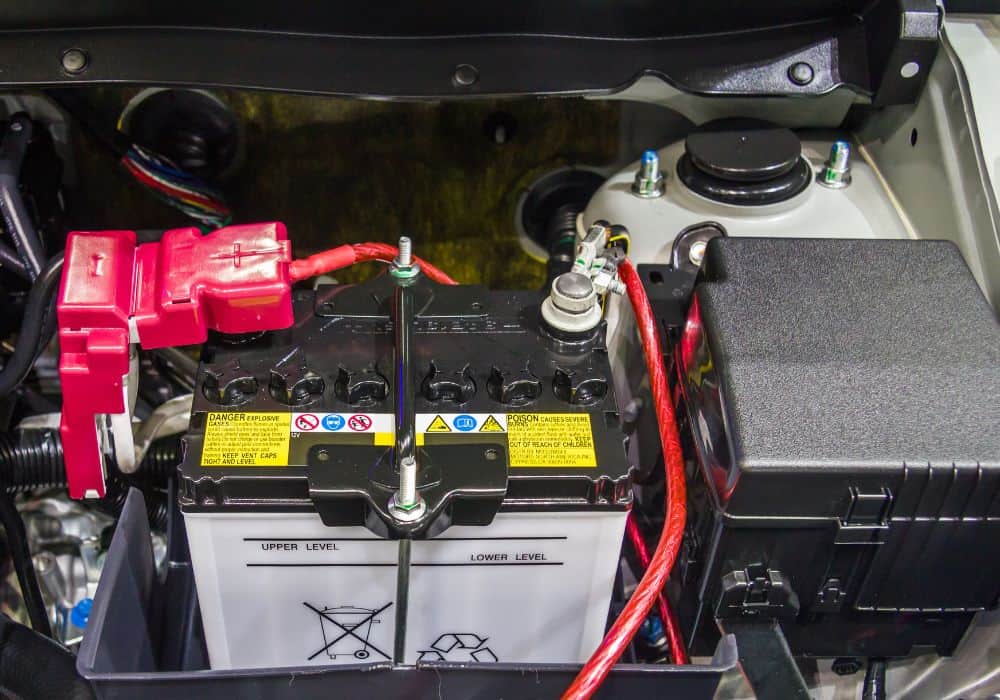 This is the reverse of the above – the first letter indicates the month and the first number – is the year. The principle is exactly the same, they are just in a different order.

Here things can get more complicated. Often, on PSH, PSG, and PG Series Product Date Codes, as well as some others, the first 5 characters in the code indicate the manufacture date and they are all numbers.

The first two characters indicate the month (e.g. 07 means July), the second two characters indicate the day (17 means the 17th), and the 5th number means the year, or the last number of the year the battery was manufactured in. So, a code that starts with 071709 would mean the battery was made on July 17th, 2019 (or 2029 if you happen to be reading this in the 2030s).

A yet another option that can be seen on Powersport Batteries Product Date Codes and some others is a (Y/MM) format where the first 3 characters of the code indicate the manufacture year.

What do the other characters on a car battery’s code mean?

The rest of the numbers and characters on a battery’s code can mean different things, depending on the battery’s manufacturer. Usually, these are injection mold numbers or other internal lot numbers. As such, they don’t really reflect on the battery’s age, quality, or health so they are of little import to us as drivers.

What other ways are there to determine a car battery’s age? 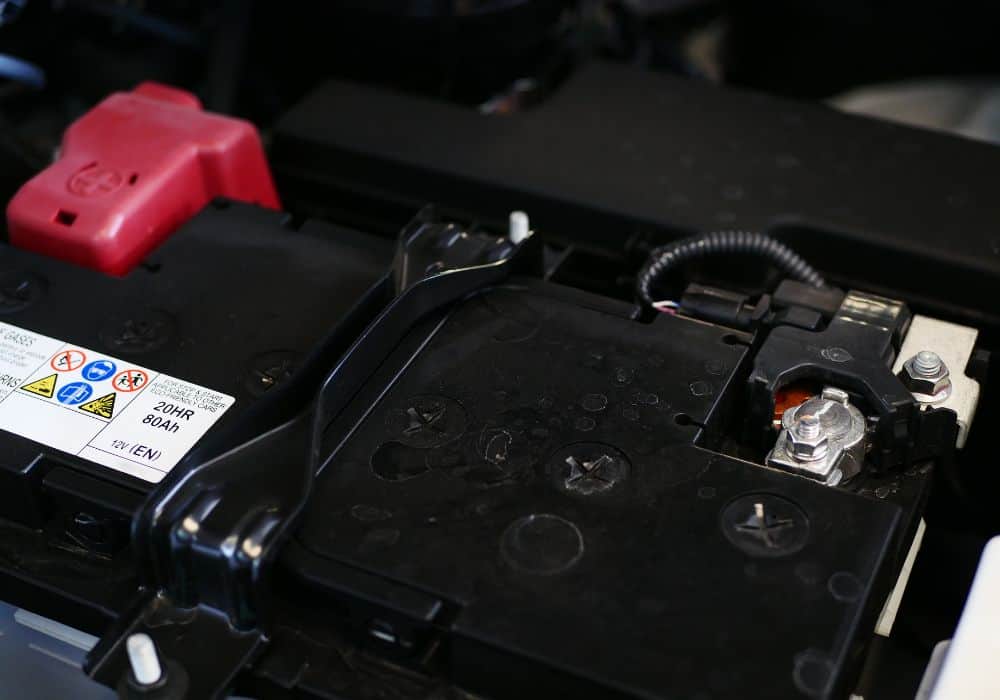 If you’re having trouble determining the age of a car battery – likely because you can’t find or read the year of manufacture, because the sticker has been torn off or corroded over, and so on – how else can you get the necessary date information?

Well, if looking under the hood doesn’t help, you can just look at your purchase receipt – either of the car, if you bought it new, or of the battery.

If you didn’t get your car from a dealership but secondhand, it’s worth getting in contact with the person who sold it to you. Additionally, even if you got a new car or a new battery yourself, it’s important to note that the purchase date and manufacture date aren’t the same things – both a “new” car and a “new” battery can spend months and years in a dealership before being sold.

Yes, unsold cars and car batteries don’t get nearly as much use as purchased ones but they still age and are getting used occasionally. That being said, you can also always try contacting the dealership or store you bought the car or battery from and ask them for more information.

If none of the above is an option – you can’t read the manufacture date on the battery, you don’t have receipts from its purchase, and you can’t get information from whoever sold the car or battery to you – you might just never learn the exact manufacture date of the battery. In that case, just use it with care – if it is even usable – and do regular check-ups.

Determining the right time to get a replacement battery isn’t always easy but the rule of thumb is “better safe than sorry”. A car battery tends to last somewhere between 3 to 5 years or up to 7 if you take really good care of it. So, fixing even the smallest issues such as corrosion as soon as you notice them is ideal.

Even then, however, you are going to have to get a new battery eventually. So, it’s also a good idea to remember the manufacturing date of your battery – the further away from it you get, the more maintenance your battery is going to need, the more frequent check-ups, and the more likely it is to start noticing issues such as dimmed headlights, quieter audio, and so on.