Skip to content
UniEnergy Technologies » Where Is The Battery In A Prius? (How To Replace A Prius Battery?)

When it comes to dependable hybrids, Toyota Prius is definitely one of the most coveted choices among drivers. And if you’re planning to purchase one, it’s vital to be adept at how it works and how all parts are positioned. In this article, you will learn where is the battery in a Prius located.

Since there are several Toyota Prius models, it’s also important to know them. In addition, we will provide you with an in-depth guide on how to change the battery as well as what to do when the battery dies.

What is a Toyota Prius?

Toyota Prius is a renowned compact hybrid vehicle that tops the fuel efficiency category. It has an electric-powered and gas-powered engine, which allows the vehicle to reuse energy. Likewise, the comfy seating space and expansive cargo dimension add up to the popularity of Prius models.

Over the years, there have been several models released in the market that focuses on a certain strength. With the variety of Prius models, you can easily choose the best option for your driving needs.

The five latest Prius models are the following: 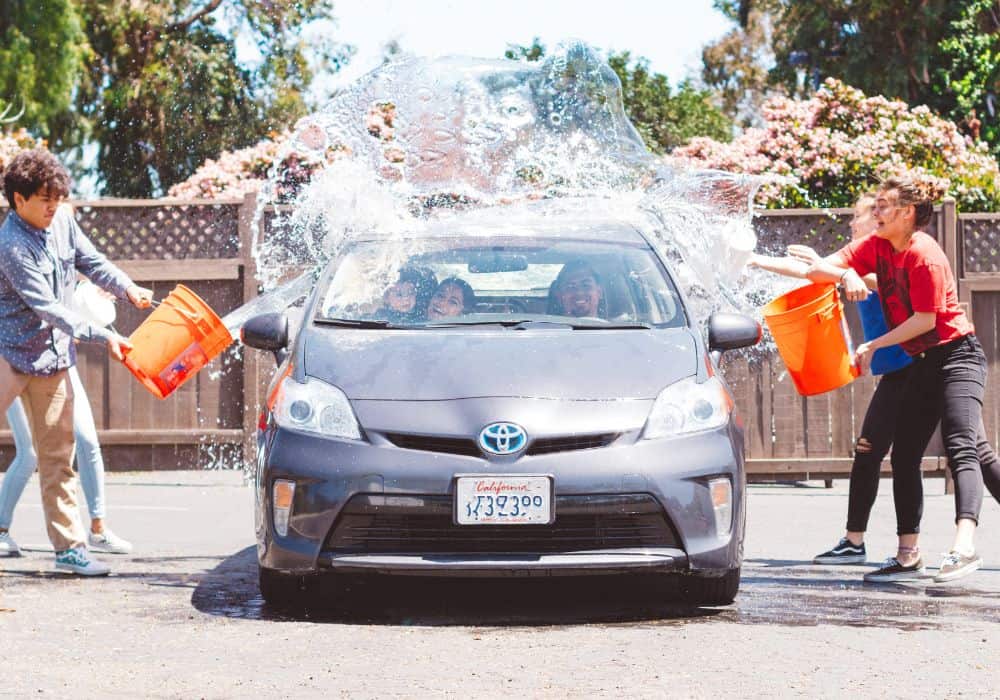 What is the battery of Toyota Prius models?

On average, Toyota Prius has a 12-volt battery, which is intended to power the electronics. It generally uses either Lithium-ion (Li-ion) or Nickel-Metal Hydride (NiMH) batteries, although more modern models utilize both.

Furthermore, the size of the battery is quite smaller compared to normal cars. It accentuates a glass mat feature, unlike the typical lead-acid nature. Therefore, buying one can be a challenge.

You may directly purchase it from a Toyota dealership store that offers current parts specials. Another option would be Optima, which is a reputable battery company that manufactures a series of excellent batteries for different cars.

Where is the location of the battery in the Toyota Prius?

Unlike normal cars where batteries are stationed in the engine bay or under the bonnet, the battery of Toyota Prius models is generally located in the same area as the passengers. It can be found at the right rear part of the trunk, specifically under the plastic molding of the passenger compartment of the car.

Knowing the location of batteries for Prius models and other Toyota hybrid vehicles is crucial for a car owner. More so, it is imperative, especially during unfortunate situations like battery issues or perhaps a dead battery during a long trip.

What are the reasons why you need to change the battery?

Although the Prius Toyota Prius’ battery life is designed with a higher life expectancy, it can still wear out and get dilapidated over time. There are several factors that impact the battery life of an electricity-powered/ gas-powered vehicle. These include usage, maintenance, and age of the car.

The weather condition also takes up a huge part in the longevity or havoc of batteries. Because of the factors that you need to consider, it’s vital to learn the average battery life of Prius cars.

When driven for lengthy periods, the average life of hybrid car batteries settles between 4 to 5 years. Meanwhile, if you only use it for a short span of time, then it may work efficiently even up to 8 or 10 years. This is roughly around 100,000 to 150,000 miles.

How do a replacement of a Prius battery?

Now that you have an idea of where the battery in Prius models is located, it’s easy for you to work on battery inspection or battery replacement. However, there are still things that you need to comprehend to be able to jump-start a hybrid car like Prius.

So, in this section, we will discuss the process of how to remove the interior workings from the right rear of the trunk and how to replace the battery. In addition, all tools needed are listed down so you can gather them beforehand for a smooth and successful operation.

Part 1 – Removal of the old battery

When replacing an old battery, you have to be ready with the tools. Prepare the jumper cables, together with the drive ratchet, some deep sockets, and a flat screwdriver or a crowbar.

Before you start with the process, make sure that all vehicles are turned off and parked safely. Then, find the fuse box under the car’s hood. If there is a floor mat, then don’t forget to take it away to have a better view of the battery.

There are bolts on the side of the car body that you need to carefully remove. Swing them aside and ensure that the wires attached to each bolt are still intact.

After getting rid of the bolts, it’s time to pull out the positive cable, together with the plastic covering. Using a screwdriver, loosen the bolt that connects to the terminal and then take the terminal cautiously without touching any section of the car. You may wrap it inside a rag to prevent electrical issues.

To remove the battery hold down, which is a bar that sits on top of the battery, you need to loosen up the bolt and nut connected to it.

It’s highly suggested that you remove the negative terminal from the car body instead of directly from the battery. It’s because of the position of the bolt that links to the car, which makes it quite easy to reach compared to the terminal itself. Subsequently, fold the wire across the battery.

Part 2 – Installation of the new battery

When setting the battery, make sure that the positive terminal is stationed towards the front section of the car. After that, bolt the negative terminal to the car and put back the hold-down bar. Snug the bolts and nuts but don’t tighten them excessively to avoid contorting the battery.

The next procedure would be to attach the positive terminal assembly carefully. It’s important to not exert too much force when twisting the wires to prevent damage.

In this step, you are required to do replacements of worn-out or damaged parts such as the vent tube, cooling vent, and brake controller. When changing the vent tube, you need to press it into the hole section located at the side of the battery.

How to jump-start a Toyota Prius?

Aside from learning the technicalities of Prius battery replacement, it also pays off to be adroit in jumpstarting hybrid cars like Prius. This gives you the chance to work on simple battery problems on your own.

Having an in-depth grasp of the components of your Toyota Prius is very crucial. It allows you to easily navigate the key parts in case of unforeseen events like battery breaking down and such. Moreover, it gives you the advantage of doing the repairs personally, saving money on labor and additional costs.