Skip to content
UniEnergy Technologies » Why Won’t My Car Start After Replacing the Battery? (Reasons & Solutions) 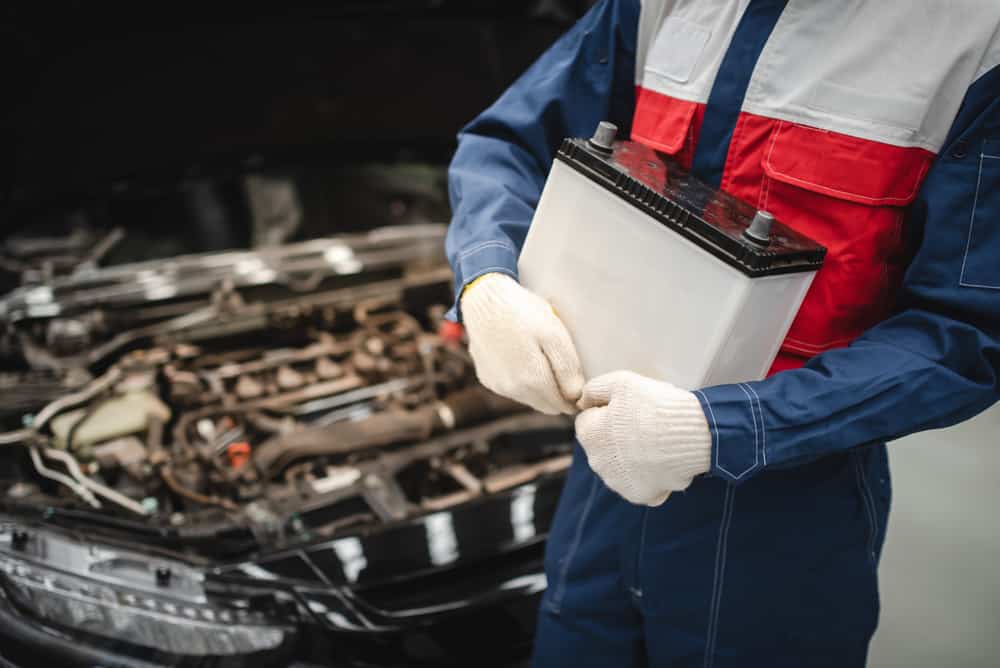 Struggling to answer the question why won’t my car start after replacing the battery? Well, we may just have the ultimate answers for you. In many cases, a car that won’t start is usually associated with battery issues. Whether you get a kkkk or grrr sound when starting the vehicle, the issue is most likely a battery problem.

But, sometimes, you still may end up struggling even with a change. The good news is that several factors can explain why your car won’t start even after a battery replacement. Here’s a complete guide to explain away the reasons for your car still not starting and how to fix the problems.

Why Is My Car Not Starting After Replacing The Battery?

The most common reason why your car won’t start after replacing the battery is the incorrect placement of the new battery. In fact, if you struggle with a car not starting after a fresh replacement, this is the first place you want to check.

So, when diagnosing the problems associated with the car not starting, this is where you want to start.   First, check the compatibility. When it comes to battery compatibility, you can always refer to your car’s owner’s manual to pinpoint the ideal battery specs for your vehicle.

If you find the owner’s manual difficult to understand, a qualified mechanic can always offer much-needed assistance. Next, make sure the battery wires and cables are connected properly and clamped down tightly. If the issues were battery installation related, your car should resume working instantly.

However, you may find that there are no issues associated with the battery placement. Don’t panic. There are several other common reasons why your car will not start even with a new battery replacement.

Reasons My Car won’t Start After Replacing The Battery

Here are other common reasons why your car won’t start even with a new working battery;

Even with a new working battery with the right specs, size, and capacity, you may still experience battery-related problems forcing your car to fail to start. You may have corroded battery connectors, terminals, or terminal ends.

Corrosion of the battery connectors occurs over time and is caused by gasses that escape the batteries, among other issues. Now, if left unclean, the connectors, terminals, or terminal ends begin to corrode. This, in turn, prevents electrical charge from traveling from the battery to the rest of the car.

An alternator plays a role in starting and keeping the car engine on. This electric generator keeps the battery charged and the car’s electrical system on when it is running. A kkkk sound when you crank the car unsuccessfully is a constant indicator that your car’s charging system has gone bad.

You will also notice that the battery icon light on your car’s instrument panel comes on as well. Other obvious signs of an alternator not working include abnormalities in the car’s electrical system. These include a growling sound when the car runs, especially with the ac on, slight difficulty rolling the power windows down or up, and extremely bright or dim headlights, to mention a few.

Now, with a bad alternator, even with a new good battery and clean connectors, it just won’t work. It’s the alternator that charges the battery. In fact, in some cases, your car may even start and go a few meters before going off.

This is because it uses up the charge the new battery may have had and goes off when the charge is used up.  Further, you may even have replaced a good working battery without knowing that the alternator was the problem.

Even with the somewhat obvious signs, you want to take extra precautions when diagnosing a bad alternator to be the cause of your car not starting. After all, an alternator can be quite costly, fetching anywhere between $250 and $700, minus labor charges. So, you want to get a skilled mechanic to confirm this for you.

Lights turning on and having the power to deliver to the car without it starting may be an indication of a bad starter. With a bad starter, you may hear a growling sound or no sound at all when unsuccessfully trying to turn on your car.

You may also hear intense grinding or clashing sounds when trying to start your car. This is a clear sign that you have a bad starter, particularly a starter with broken teeth, the starter motor, or a starter relay. In other cases, you may have issues with the key ignition switch itself. 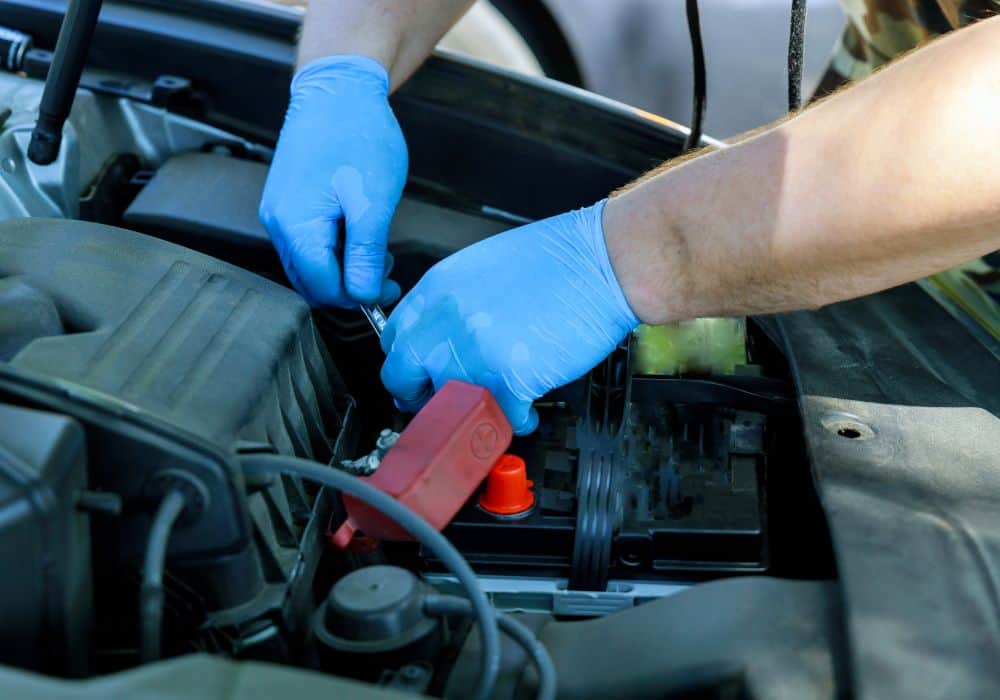 In other instances, you may have bigger engine troubles. Your engine may have failed and you misdiagnosed the problem as a bad battery that needs replacement. Before the battery replacement, if you noticed signs such as knocking or tapping sounds, or even a burning smell coming out of your engine, the engine may be the problem.

It can be anything from fuel pump relay issues, a blown fuse, a weakened fuel pump motor, or a dead fuel pump. In other cases, there may also be problems associated with the car’s fuel injector, even if the pump works fine.

So, you are better off having a mechanic diagnose the problem further if you suspect the fuel pump to be the problem. It may be that it needs repairs or complete replacement.

Old spark plugs can also be the cause of a vehicle that won’t start.  Generally, it is recommended to replace spark plugs after you hit the 80,000 to 100,000 miles mark on your car. Driving with the same bad spark plugs beyond this may start to cause problems, including the plugs not firing enough spark to turn the engine.

If you drive a more modern vehicle with complex electrical systems, these may be the problem, a parasitic draw being one of them. This refers to when your battery’s charge is still utilized even after you turn off the vehicle.  The easiest way to gauge the actual problem is to have a mechanic diagnose the problem with especially accurate diagnosis tools.

This is a pretty simple problem, but one that is sometimes difficult to detect. For example, during the battery replacement, the security system may have been engaged, prompting the anti-theft feature to activate. In this case, your steering wheel will remain still. In other instances, the problem may be that your proximity key is nowhere near the car – so the car won’t start.

According to experts at AutoZone, human error can also cause a car to not start even a few hours after installing a new battery. Accidentally leaving the interior lights or exterior headlights on for hours can prevent your car from starting.

Leaving lights on for hours can drain your battery, – ultimately, ending up with a dead battery. This will force you to recharge it (use jumper cables for a jump-starting boost from another vehicle) or replace it with a new one. 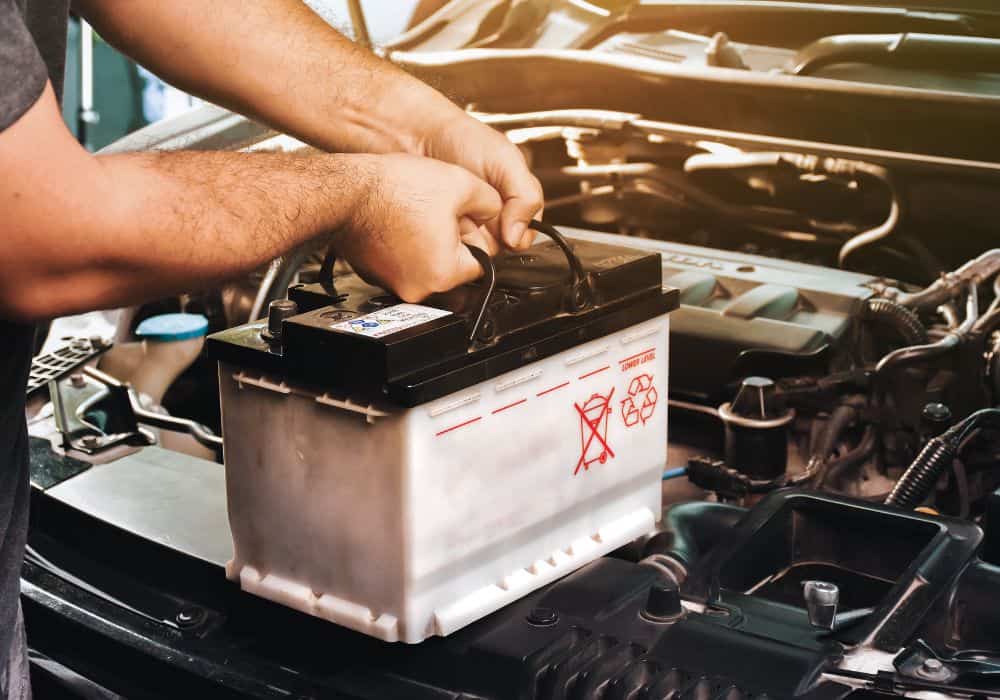 Solutions To A Car That Won’t Start After Battery Replacement

With every problem you may experience, there is a solution. So, here’s a step-by-step guide to rectifying problems associated with a car that won’t start after replacing the battery;

If you notice your battery connectors, battery posts or terminals, terminal ends, and even clamps are corroded, you want to try cleaning them first. If the corrosion isn’t widespread or intense, you can salvage these components with a simple cleaning.

You can use a battery cleaning spray or a one-part water and one-part baking soda paste to neutralize the corrosion. Next, use a clean rug with clean water to wash off the rust. Clean all areas of the batteries, leading from the negative and positive terminals to where it connects to the starter.

Here’s a detailed video on how to thoroughly clean out corrosion from battery components;

2. Bad Alternator: Check or Change It

The easiest way to diagnose a bad alternator is to use a voltmeter while the car is running. A car with a healthy alternator and battery will have the voltage slightly jump high when it’s running. A lower voltage or no voltage jumping at all indicates a problem with the alternator.

But, it’s impossible to conduct this test with a car that won’t start at all. So, your next best bet is to simply take it to a qualified mechanic for a proper diagnosis. If you have to replace the alternator, prepare to spend anywhere between $250 and $700.

The simplest way to know the starter is the problem is when all other electrical components, like lights, come on, but the car won’t start. However, a starter also has multiple parts, such as the solenoid and motor.

So, to pinpoint the actual problem, you want to consult a professional mechanic. Prepare to pay anywhere between $150 and $800 if your starter will require an overall replacement.

If your vehicle has a security system that engages accidentally during battery changes, refer to the security system owner’s manual to help you reset it. A simple rest should allow your car to resume working as normal.

Ultimately, complex issues such as engine failure, dysfunctional fuel pumps, or old spark plugs are better fixed by a mechanic. After all, a mechanic eliminates the guessing game, allowing you to instantly pinpoint the problem and save cash fixing things that needn’t be fixed.

As indicated in the guide above, the answer to why won’t your car start after replacing the battery varies. It can be anything from a battery that needs repositioning which won’t cost you a dime. But, it can also be a more complex engine failure problem that can eat up to $2000 from your pockets.

The best solution is to follow our mechanic-approved guide which filters out the issues. If you notice your car has any complex problems you can’t fix, drop that wrench and call a mechanic. It will save you bucks along the way!