Skip to content
UniEnergy Technologies » Wired VS Battery Smoke Detector: Which Is Better? 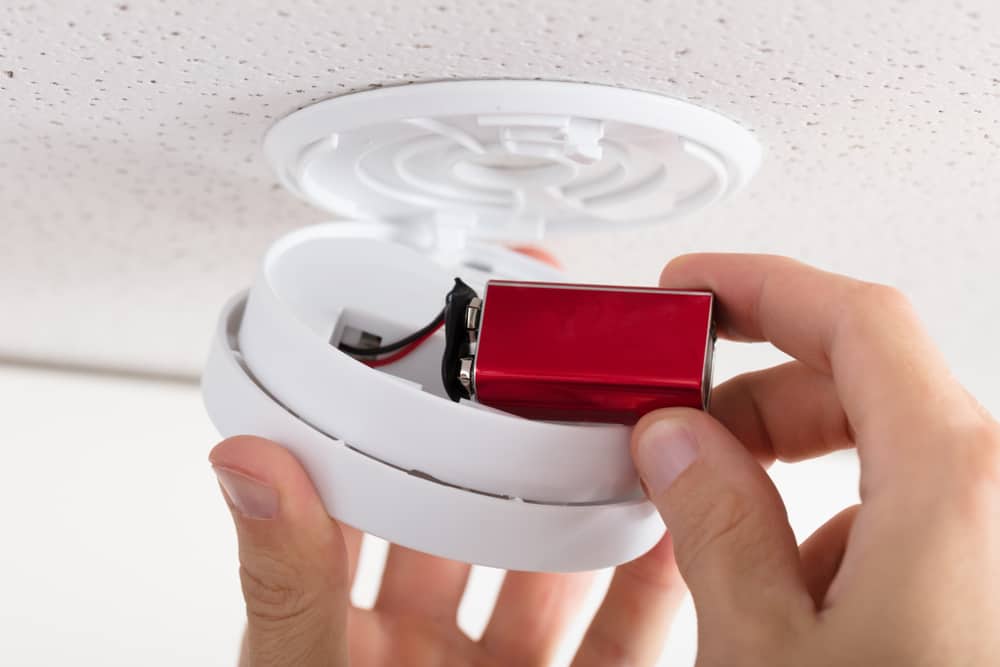 Which type of smoke detector is best for my home?

This is one question you might ask yourself when shopping for new smoke detectors. Luckily, this article will address this question once and for all.

Hands down, a smoke detector is the most crucial component in a home. It’s essential for early fire detection in a home and often means the difference between life and death.

However, most people find shopping for the right smoke alarms frustrating and overwhelming. That holds, especially for those buying a smoke detector for the first time.

This wired vs battery smoke detector comparison will provide you with everything you need to know to help you make an informed purchase.

Which Is Better Hardwired or Battery Smoke Detectors?

As the name suggests, a hardwired smoke detector draws power from the main electrical box via a cable that runs unseen behind your home’s wall or ceiling.

In some states like New York and California, the smoke alarm requirements dictate that battery-powered smoke detectors should come with a 10-year battery warranty.

However, this information is insufficient to help you identify the right smoke detector and carbon monoxide detector for your home. For that, we need to highlight more differences between the two devices.

Here’s how these smoke detectors stack up against each other. 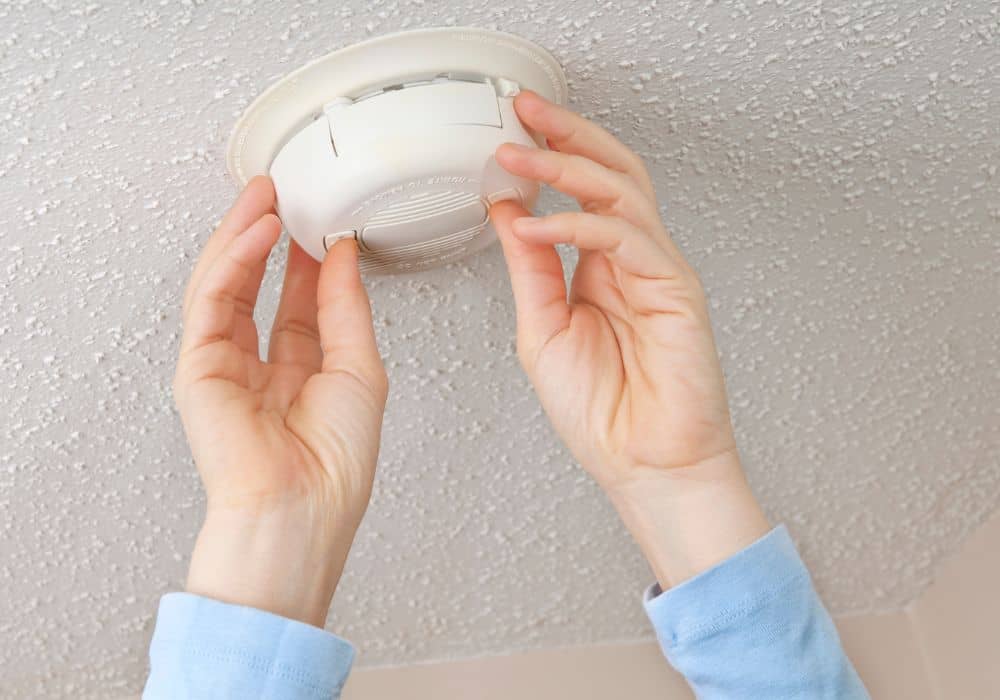 Of course, the first comparison will involve the cost of devices. You will find plenty of affordable options for hardwired and battery-powered smoke alarm systems on the market.

But most people opt for battery-operated smoke detectors because of their low costs and installation costs. Expect to pay anywhere from $10 to $35 for this unit, not including the installation fee.

As for hardwired detectors, expect to pay a little more. Unlike battery-operated smoke units, these devices require electrical wiring to complete the installation.

Expect to pay between $35 to $100 for basic hardwired smoke detectors if you already have an existing power box. For premium UL-certified wired smoke detectors, you might spend more than $150, especially if you need to install a new electrical box. But you can save on costs if you install the device yourself.

But in terms of cost per unit, hardwired smoke detectors are cheaper because they usually come in multipacks.

Besides installation, the cost can also depend on several factors, including

Hardwired smoke alarms require constant power. They must be connected to your home’s electrical system to function properly.

You can install the fire alarm yourself, but only if you have the technical know-how (a good familiarity with your home’s power supply system and every electrical circuit). If you don’t, call a professional electrician to handle the hardwired smoke detector installation or replacement.

Usually, hardwired smoke alarms get installed by splicing into a home’s lighting circuit or outlet circuit. However, some municipalities might require the detector to be connected to a dedicated electrical circuit.

Installation of battery-only smoke detectors is pretty straightforward. You just need to screw a bracket or mount it to the wall or ceiling of your garage, living room, or basement and attach the detector. 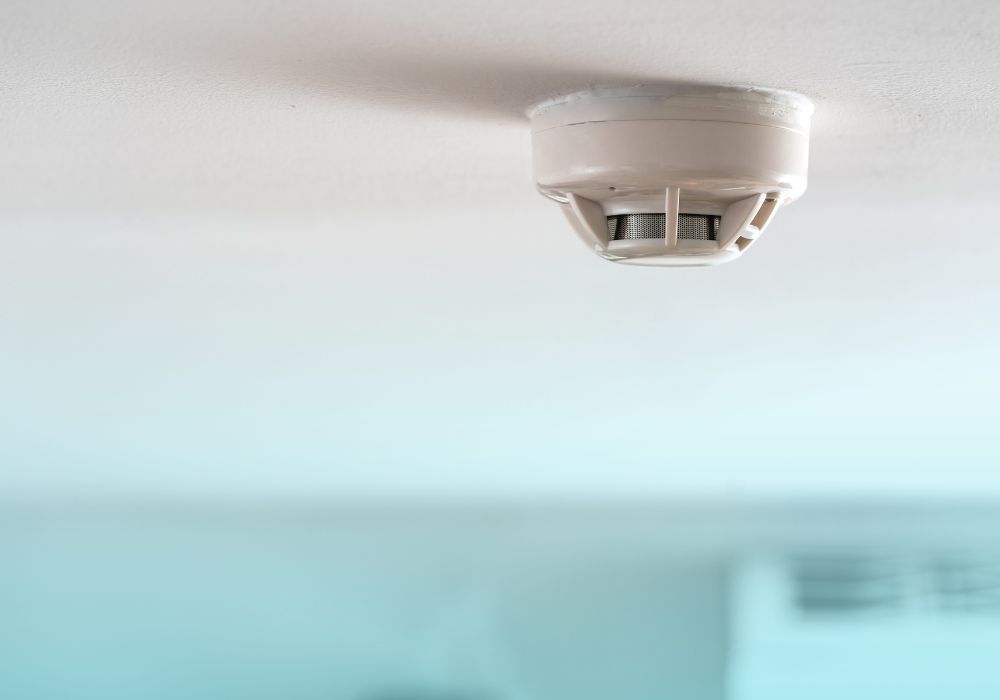 Smoke detectors play a vital role in signaling home fires and triggering a cascade of other alarms that address the threat, trigger suppression systems, and coordinate response efforts.

However, several factors can affect the effectiveness of a working smoke alarm and reduce its functionality. These factors include:

Regular testing and maintenance are paramount to allow early detection of fire threats and avoid false alarms. Smoke alarm systems should be replaced every 10 years and checked monthly to ensure they function at an optimal level.

One of the major disadvantages of hardwired smoke detectors is that they are hard to maintain. Before any maintenance procedure, you have to switch off the power in the main electrical panel. This way, you can check the unit and replace it without getting electrocuted.

Besides the smoke detector unit, you must also check the wiring inside the walls for any issues. For this, seek the help of a professional technician.

Maintenance of Battery-powered smoke detectors focuses on battery replacement. Homeowners should check the detector’s battery every month and replace weak batteries after 6 months. You can easily DIY this smoke alarm maintenance.

As mentioned earlier, hardwired smoke detectors come as multipacks that can be interconnected. In case of a fire, all the alarms connected to the hardwired system will get triggered simultaneously.

The interconnectedness allows the alarm system to detect flame even in the remote parts of your house. Think of the corner sleeping area, basement, hallway, and garage. As a result, it increases fire safety since homeowners receive early warning of fire before it can cause significant damage.

Most battery-operated smoke detectors run as a single unit in one part of the house. As a result, you cannot connect two or more alarms. But if you opt for wireless smoke detectors, you can create a wireless alarm network via your home’s Wi-Fi system.

Nevertheless, wired interconnectivity offers more reliability than a wireless system. This is because wireless interconnectivity is limited by distance. Furthermore, electronics in the house and walls can interfere with the transmitted radio signals.

Battery-operated smoke detectors depend on battery power that gets depleted at some point. Whether you have installed photoelectric or ionization smoke alarms, expect them to die eventually.

That’s true, especially if you miss or ignore the warning flashes. Moreover, it’s difficult to know if the sensors have stopped working or turned off due to weak batteries unless a fire occurs.

Hardwired smoke alarms draw power from the electric box through a 120 V electric cable. In an interconnected setup, the cable runs from one sensor to the next. As a result, all alarms enjoy a continuous power supply.

In case of power interruption, the hardwired system features a battery backup that kicks in, allowing the sensor to detect smoke. With two power sources, hardwired smoke sensors are more dependable than battery-powered alarms.

Where to Install Hardwired and Battery Smoke Detectors?

According to the NFPA smoke alarm code, smoke sensors should get installed in the following places:

Whether you have bought an ionization sensor or photoelectric sensor, avoid mounting it near windows, doorways, or ducts. This is because the draft might impede the ability of the smoke sensor to function properly.

While you might get tempted to paint new smoke detectors, don’t! Decoration, paint, and stickers can prevent the smoke from entering the detection chamber. As a result, the sensors might not sound in case of a fire.

Another thing, ensure interconnected smoke detectors are from the same manufacturer. If not compatible, the alarms will not sound if one gets triggered.

How Long Do Hardwired and Battery Smoke Detectors Last?

Fortunately, most battery-powered detectors come with 10-year built-in lithium batteries. Therefore, you can enjoy a decade’s worth of smoke and fire protection. If possible, you can upgrade to a 10-year combination sensor that can detect carbon monoxide in the house and last for a long time.

Hardwired smoke sensors depend on power from the household electric circuit. The battery backup only comes into play if there’s a power outage or interference. The non-removable batteries can last for 10 years.

Remember, most jurisdictions require homeowners to change their entire smoke alarm system after every 10 years.

Despite being one of the most important components of a home, homeowners often overlook smoke detectors. However, these devices can save lives and property by providing early fire detection.

While there are different types of smoke sensors, like photoelectric and ionization, they all depend on two power sources: the home’s electric circuit (hardwired) and the battery.

Hardwired smoke detectors stand out for their interconnection, dependability, and power backup. However, they’re hard to install and maintain.

Battery-powered smoke sensors are easy to install and maintain and last longer. But you cannot connect two or more battery-powered alarms unless you opt for wireless smoke detectors.

So, which smoke detector is the best?

Well, your best choice will depend on your fire protection needs, willingness to install, and budget.

That marks the end of our comparison guide. If you found it helpful, tell us in the comment section.

1 thought on “Wired VS Battery Smoke Detector: Which Is Better?”