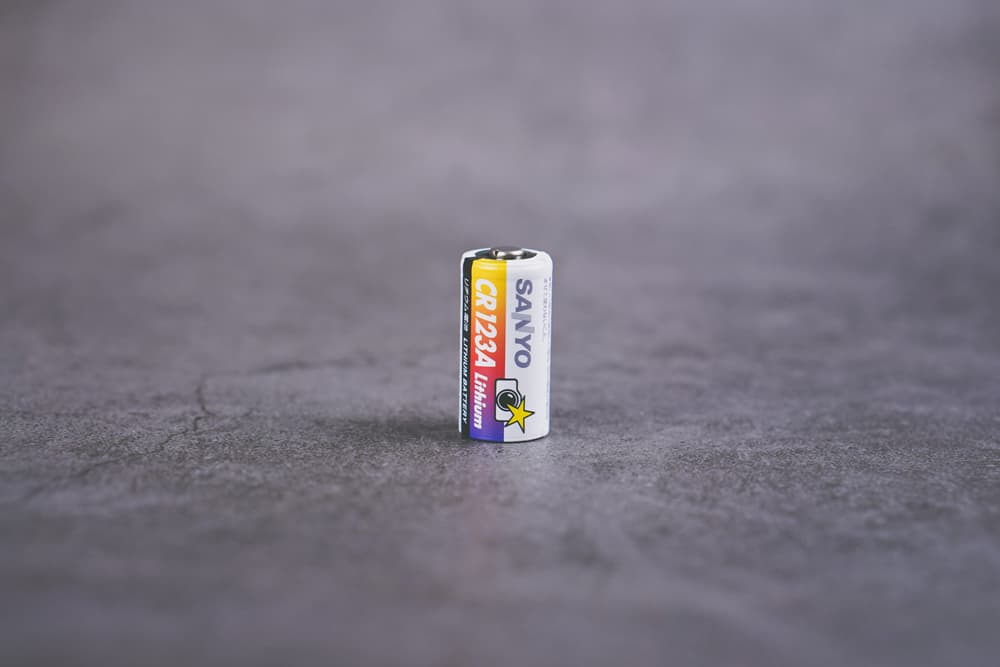 Batteries can be categorized using different criteria. The first of these classifications are primary batteries (aka disposable or single-use) vs secondary batteries (aka rechargeable). Secondary lithium batteries are commonly used in smartphones and other electronics, but you can find disposable lithium cells too. So let’s distinguish the CR123A vs 18650 battery.

The Basics of Lithium Batteries

You might be familiar with the usual sizes of dry cells – AAA, AA, and D. These batteries are typically made from combinations of zinc, manganese, silver, nickel, or cadmium. But in recent times, lithium batteries have become more popular because lithium has the highest electrochemical potential among the elements. This means they release electrons efficiently.

As a result, lithium does an amazing job of producing electrical current. And while most lithium cells are rechargeable, you can still find some that are single-use cells. CR123A and 18650 batteries are both lithium-based batteries, but their functionality is slightly varied. Visually, you can identify them by physical size. C123As are shorter while 18650s are longer.

While lithium cells cost significantly more than metal oxide cells, they last a lot longer and can work in wintry weather and melting heat, so they can be beneficial for extreme temperatures.  CR123As and 18650s both have lithium in them, but CR123As are lithium-metal cells while 18650s are lithium-ion batteries. These lithium cells are popular for flashlights and cameras.

Another key variation is that lithium-metal cells like the CR123A are single-use cells while the 18650 lithium-ion is a rechargeable battery. So you could say CR123As are primary batteries while 18650s are secondary batteries. The main advantage of these two cell types is energy density. You get twice the power of AAs or AAAs for a fraction of their physical height.

All About CR123A Batteries

CR123A batteries are sometimes labeled as 123 cells or CR123 batteries. Other brands call them EL123, SF123, or DL123, but the 123 is a constant marker. Because they can hold their charge for up to 10 years in storage, these batteries are popular among survivalists. The military loves them too – most batteries that are mounted on guns and rifles are CR123As.

These kinds of weapons are sometimes called tactical flashlights. Another reason they’re so beloved is their versatility. They work equally well in extreme heat and extreme cold, so it’s the ultimate off-grid cell. Regular AA, AAA, and D batteries hold 1.5V each, but CR123A cells carry 3V per cell. The internal capacity is 1000mAh to 1500mAh, and it’s 16mm by 35mm.

Once in a while, you might bump into a CR123A that claims to be rechargeable. Some brands do have them, and you’ll see them labeled RCR123. That first R means rechargeable, and these specialized CR123s have a capacity of 500mAh to 800mAh. They have the same voltage as 18650s (3.2 to 3.7V), but if your maximum output is too low, the cell is likely to overheat.

You might also overheat your CR123As if you use a new one with an old one. And since the current flows so fast between them, your device could catch fire! Dropping or denting the cell can raise the risk of explosion, so be careful! And avoid mixing CR123A brands, since each manufacturer has slightly different specs and any inconsistencies could damage your gear.

18650 batteries get their name from their physical proportions.

This dry cell has a diameter of about 18mm and a length of 65mm. Its voltage ranges from 3.2V to 3.6V and its average capacity hovers at 3000mAh to 6000mAh. These cells have a self-discharge rate of about 2% per month on the higher end, but it’s often listed as 30% per year, even when the cell is idle.

This means you can keep the battery unused for 2 to 3 years, but it’s a good idea to recharge it every 6 months or so to extend its shelf life. To be on the safe side, charge your unused 18650s three or four times a year to keep them fresh. Still, even within this battery class, you can pick one that matches your needs. Some are built with a high capacity that drains slowly.

These are best for tactical lights since you don’t want them clicking off at inconvenient times. Other types have a low capacity when you want minimal voltage streams that won’t overload your equipment. But their high draining rate means you’d have to recharge them more frequently. Be sure to buy a compatible charger or you may soon kill your 18650s.

Newer brands of 18650s will sometimes have a micro-USB port near the tip. They cost more but offer added convenience because you can charge them with smartphone cables. But since you can only charge one battery at a time, you’ll need a multi-slot charger if your device uses more than one cell. Under the right circumstances, you can substitute CR123As for 18650s.

Protection and Safety Features on 18650s

If you use the wrong charger, you risk undercharging or overcharging. You might also discharge your cell so deep that it refuses to power up when you place it in the charger. This will kill your battery and could damage your device too! Luckily, some 18650s come with a built-in feature that balances the AC current and breaks the circuit if it gets too high or low.

This feature is called a Protective Circuit Board or PCB. It’s a piece of electronic hardware that sits just before the tip of the cell, and it acts as a circuit breaker for safety purposes. Something else to consider is the physical design of the battery. Industrial cells can come in unbranded casings that are one color, often a neon shade. But retail batteries look fancier.

Their branding is instantly recognizable, e.g. HolyFire. PCBs or protected batteries are taller than bare batteries. And some cells have a flat top positive terminal while others have a raised node aka button top batteries. This can affect the physical fit of the cell. A button-top battery would stand a little taller, but most devices come with built-in compression springs.

While all li-ion batteries have the same voltage range, their capacity in amp hours is far wider. In theory, the higher the Ah (or mAh), the longer your battery will run before it needs recharging. This is because the ampere-hours show how much latent energy is stored inside the cell. Also, the maximum continuous discharge is a measure of the highest output rate.

When you’re checking prices at the electronics aisle, CR123As have a lower purchase price. But since you’ll buy thousands in your lifetime, the cost builds up. Conversely, 18650s cost almost 10 times as much to buy, but since you can recharge them at least 500 times, you’ll save money in the long run. After all, one 18650 is technically the same as 500+ CR123As!

Because these batteries are largely used in tactical flashlights, their illumination ability is a top selling point. If you load your light with CR123As, it will shine bright at the start then gradually get dimmer as the battery depletes. This gives you sufficient warning to reduce the battery. With 1865os, the light burns bright throughout its lifetime, then one day it goes off!

Another key factor is that you can buy CR123As almost anywhere and store them unused for years. 18650s are harder to find. You may need to pre-order them or go to a specialty store. And because they discharge at about 1.5% to 2% per month, they’ll be useless if they sit on the shelf too long. Even if you never open the pack or load them, they’ll run dry in two years.

The batteries are rechargeable though, so even if they deplete before you open the pack, you can still juice them up 499 more times. But this self-discharge rate does mean if you open the pack during an emergency, you’ll have to wait a few hours while it recharges! That’s why it helps to keep some CR123As on hand for urgent scenarios.

If you load a CR123A and an 18650 at the same time, the 18650 will need recharging before the CR123A gets drained. But since you can only use CR123As once and you can use 18650s up to 500 times before replacement, your lithium-ion battery will give you more service in the long term. Both batteries have dimensions that differ slightly across brands, so heads up!

Light Up the Lithium!

What are the main distinguishing factors for a CR123A vs 18650 battery? Here are a few:

Have you recently used CR123A or 18650 batteries? Share your experience in the comments!