Skip to content
UniEnergy Technologies » How To Transfer Battery Power To Another Phone? (Ways & Instructions) 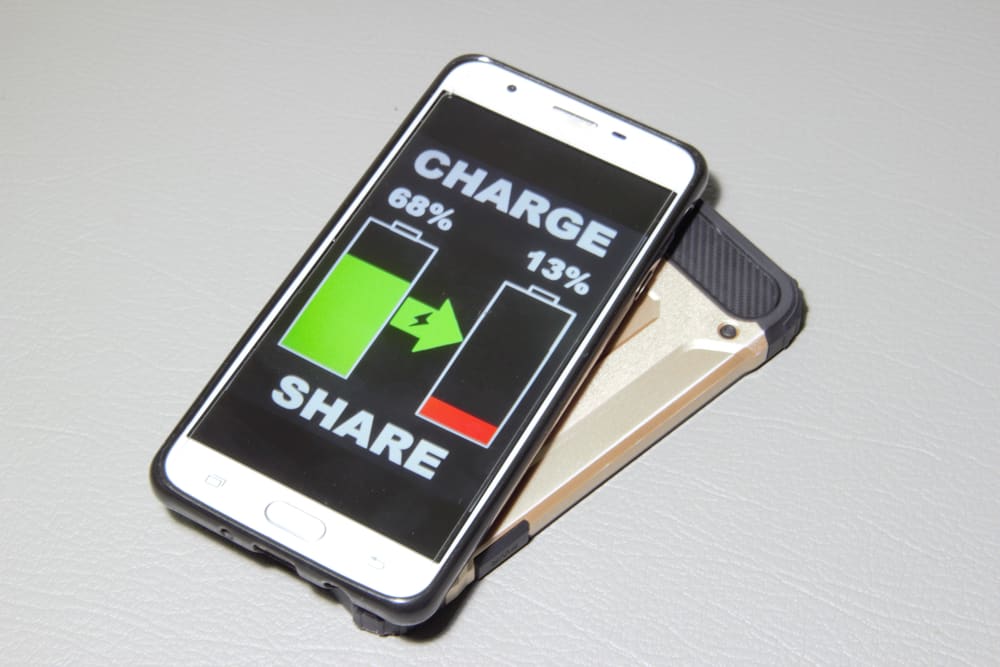 Imagine the following issue: you and your friend both have devices that need power. Your phone’s battery is dying, but your friend has a ton of energy to go around. Did you ever want to transfer battery power to another phone? It’s actually possible these days.

Can you put a new battery in your phone?

Most modern smartphones cannot have their batteries removed in the way that they once did. Unless you are a professional, removing the battery from a smartphone will break the phone. If you want to transfer battery from one phone to another, it has to be done through PowerShares.

How To Transfer Battery Power To Another Phone

The more common method to use is wireless battery power share features. Let’s talk about this one first.

PRO TIP – Most phones that have this feature (including iOS devices) will have a wireless Powershare icon that you can use to toggle this feature on. You can also check a device-specific guide to figure out if your device can do this. 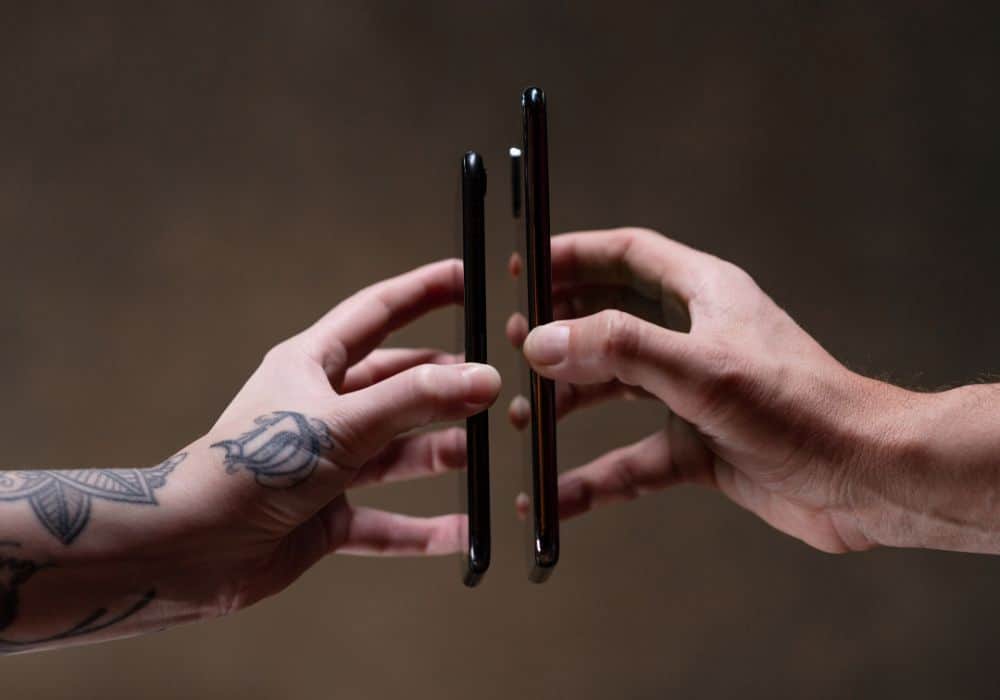 Wireless phone power sharing is a product of electromagnetic induction. It wirelessly transfers electricity from one mobile phone to another. It uses a ferrite plate, copper tape, and coils to drive energy.

You may have heard of Qi Wireless Charging. This is the technology that makes battery-share features possible. Several apps now help you find Qi charging hotspots in your area, too.

With Apple iPhones, you generally will need a power mat to transfer energy and charge them. Unfortunately, Apple seems to be uninterested in doing wireless power transfers despite being great at wireless data transfer.

2. Make sure your device can use Qi charging

Currently, the only iPhones that use fully reverse wireless charging are the iPhone 12s. Your iPhone 11, 11 Pro, and 11 Pro Max have the hardware for this, but do not seem to have a way to use the hardware this way. Even with the 12, it’s a “secret” feature.

Rumors have swirled that future iOS versions will make this perk a more accessible secret. However, there are other phone brands that have taken to fully wireless Qi charging like ducks to water. These include:

Other Samsung Galaxy devices also use this type of charging. If you have Galaxy Buds or a Galaxy Watch, then you can use wireless charging to power your wearable devices.

If you aren’t sure whether your devices can use this style of charging, check to see if they are Qi-certified. Most major gadget reviewers will have a note about this feature as part of a review.

The easiest way to transfer power from one phone to another 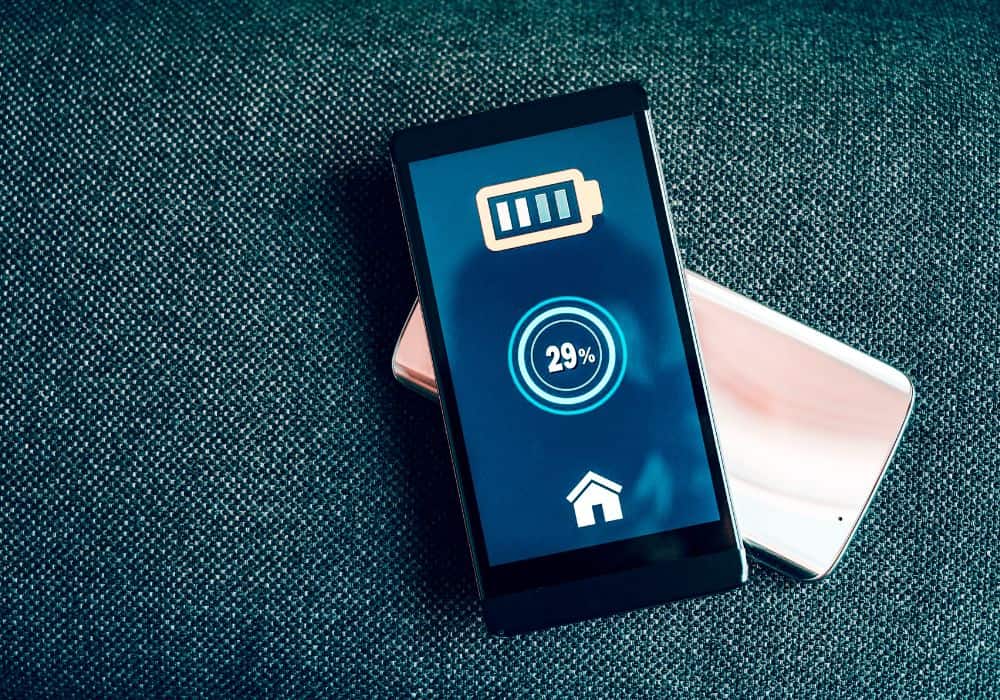 If you have an Android phone that you want to use to power another smartphone, then the easiest way to do it is through the use of a special dual-sided charging cable called the Juicer. You don’t need a charging pad to use a Juicer, just a high-battery phone.

The Juicer is the lightest phone-to-phone charger on the market, though there are others out there that do similar things. As long as you have one such cable to use, you should be alright.

To use this, you will need to plug each end into a smartphone. From there, the battery will drain from the donor phone to the recipient. It’s worth noting that not all cables will support iPhone-to-iPhone charging, so make sure you can do it with your cable beforehand.

The best way to charge a phone without wireless charging

Obviously, the best way to charge a phone is going to be the “old-fashioned way,” with a plug. However, we aren’t always that lucky. If you cannot charge your phone through a wireless connection, it may be wise to invest in a Juicer or a power bank.

Power banks are particularly useful because you don’t have to sacrifice power from a device you may want to use in order to power your phone. All you have to do is charge them ahead of time.

Not all phones will have the capacity to do wireless power transfers, but many do. If you want to get the most out of your phone, make sure to ask whether Qi charging is available for the phone that you want to get.

A good rule of thumb is that you should always try to keep a charging cable on hand, especially if you are on the go. Even if you do have wireless charging available to you, that cable can help prevent you from dealing with a dead phone.

At the end of the day, you should be able to find a power source sooner rather than later. If you know it’ll be a gambit, then you should plan accordingly. That tip is just common sense.