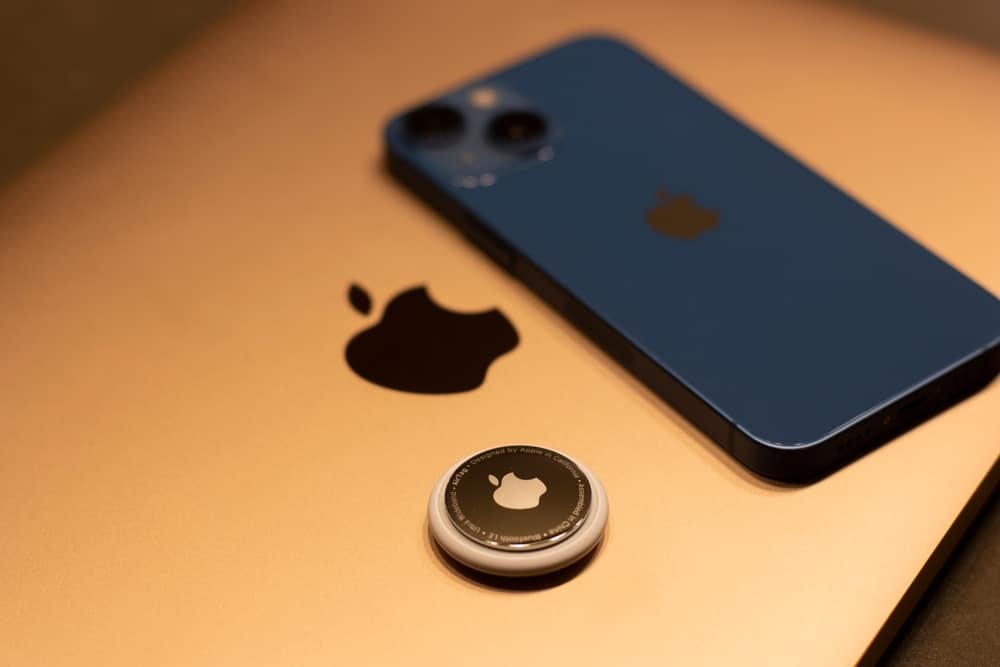 You’d be surprised at how something of a sizeable shape can get missing. The Apple AirTag is the size of a coin, and you can attach it to any item you don’t want missing.

The Apple AirTag is a smart device that uses ultra-wideband technology together with other existing networks of devices to make sure that you don’t have to deal with misplaced items, and even when it happens, you can trace them ASAP.

You can get a single one for $29, and a pack of four for $99, plus it can even be customized to your preference, at no extra cost.

Most people use it for their luggage when traveling with the public, while some use it to track items that get easily misplaced like phones, tablets, etc.

Regardless of how far it is from your Bluetooth connection, this tracker can still help you trace lost items.

However, the only downside to the Apple AirTag is that it doesn’t last forever. The AirTag has a one-year duration, and after that, it’ll need to be replaced; failure to do so, just renders it useless.

The good thing about this is that, you don’t need to go to any Apple store to get these power cells replaced, you can do it from the comfort of your home.

Keep in mind that not all batteries work with the AirTag, and we’d talk more about that soon.

How Do I Know When to Replace My Airtag Battery?

Most AirTag owners just remove the batteries after a year and get them replaced, and when you think of it, it makes logical sense. After all, the battery life is a year, right?

But, that’s not the best approach when it comes to AirTag batteries. Yes, it’s impossible to check the battery level because it’s almost always inaccurate, but you’ll receive a warning signal when you have a low battery.

Remember that the AirTag works together with your iPhone, so when it’s getting to its expiry level, you’ll get a notification on your iPhone.

Usually, you’ll receive a message from “FIND MY APP” pointing out that your coin battery is low and you need to get it replaced as soon as possible.

It’s recommended that you browse through the “FIND MY APP” once in a while, so you can immediately know when your battery needs replacing.

What Types of Batteries Are Compatible with Apple’s AirTag?

Remember we previously mentioned that not all batteries are compatible with your AirTag, and putting the wrong battery can even cause you to damage your device.

Ideally, you are to replace your AirTag batteries with just the standard CR2023 lithium cell batteries. However, this battery is of two types; one with a bitterant and one without.

The CR2023 coin cell battery that comes with a bitterant was designed that way, so kids get discouraged from putting it into their mouth; after all, no child loves a bitter lollipop. But unfortunately, the bitter coating affects the conductivity of the cell, making it difficult to make good contact with the AirTag, and this can affect its efficiency.

So, to avoid having to deal with that, it’s best to buy CR2023 lithium coin batteries without coating, or you can remove the bitterant manually if you know how to.

How to Replace Your Airtag Battery Like a Pro

AirTag batteries can be easily removed and replaced at a low cost when you know what you are doing. You don’t need to pay a technician to fix your battery, and neither do you need special tools or skills. Everything you’ll need can be found in a local store that sells batteries.

However, if after going through our guide you are still confused, then it’s best to go to a licensed Apple store and get it replaced.

Here’s a detailed guide on how to replace your AirTag battery when it’s expired or about to;

Remember, if you do not hear a noise that shows you have successfully changed the battery, then it means you haven’t done it properly.

Quick tip; be sure to get the right batteries, and make sure you position the new battery correctly.

Once you have taken out the old batteries and replaced them with new ones, you’ll need to reconnect the AirTag again to your iPhone. This is simple, as you’ll just have to follow the prompts that appear on your phone.

Apple AirTag is a necessity if you are always looking for your items, or if you have an expensive item you don’t want to lose track of. The beauty of it is that regardless of where your lost item is, it can always be tracked, whether it’s within your Bluetooth reach or not.

AirTag batteries cannot be charged, so when it gets discharged, you’ll need to replace them, however, the replacement won’t cost you a fortune. With a few bucks, you’ll have your AirTag up and running.

There’s no other special procedure that any technician will follow aside from what we have explained above; so, take out your time and follow our instructions, and you’ll have an easy time replacing your battery.