The Oculus Quest 2 is one of today’s greatest virtual reality (VR) gadgets. You won’t need any outer connection to enjoy its aspects.

But for how long can its battery hold these happy times? Most people complain about the headset’s battery life.

Since it’s a VR asset, expect more battery usage from it. But you don’t have to worry. You can use various ways to ensure your battery remains healthy for long hours. The tips are easy to use and will take care of your Quest 2.

This article answers the question, how long does Oculus Quest 2 battery last? You’ll also know why its battery drains and its improvement tips.

How long your gadget’s battery will last will vary with your usage. Your Quest 2 can have the best time of around three hours. That will occur if you only use it to watch movies or other media or play games at low refresh rates.

But if you want fantastic gaming time, it will take around two hours. It’s because your gadget will be using 120 Hz refresh times.

You’ll enjoy it while pressuring your battery. However, you can use it while charging.

But it will reduce the battery’s life. Also, it feels uncomfortable because of the cable movement.

Your Quest 2 headset won’t have a long-lasting battery after using it for some time. But here are the factors that make this gadget’s battery die fast.

Since this item uses Li-ion, consider having a good charging pattern. Never allow your Quest 2 to complete an entire charge cycle at 0%.

It makes your battery lose its capacity over time. Once your battery drops to below 20%, it has less power, and the temperature rises.

Charging it to over 80% many times also stresses the battery. Later on, the battery will lose its holding capacity as you play.

2. Exposing it to Harsh Heat Levels

Your Quest 2 battery should get to very low or high temperatures. It makes the ions lose their power and holding capacity.

So, if such events happen often, your device’s battery will die. The damage comes because of the heat inside the battery.

This damage will occur if you overcharge your battery. Also, using it in cold places affects your Li-ion battery.

3. How You Store the Gadget

If you store your asset with a high battery percentage, the battery will have stress. If there’s a lot of energy in your battery and you don’t use it, the heat levels will rise.

A study by Battery University shows that poor battery storage leads to damage. It becomes hard to maintain the battery’s health.

The study showed that if you store your device at 100%, the battery will be 65% after three months. It’s because of the rising heat levels inside the battery.

Keeping your Quest 2 gadget connected is fantastic. Expect to get major updates and downloads.

You’ll also play many amazing games online with other players. But these features keep burdening your battery by taking up more power.

So, the battery will have some issues when your Oculus Quest 2 remains on Wi-Fi or Bluetooth. The drain will come from constant recharging and overusing it. 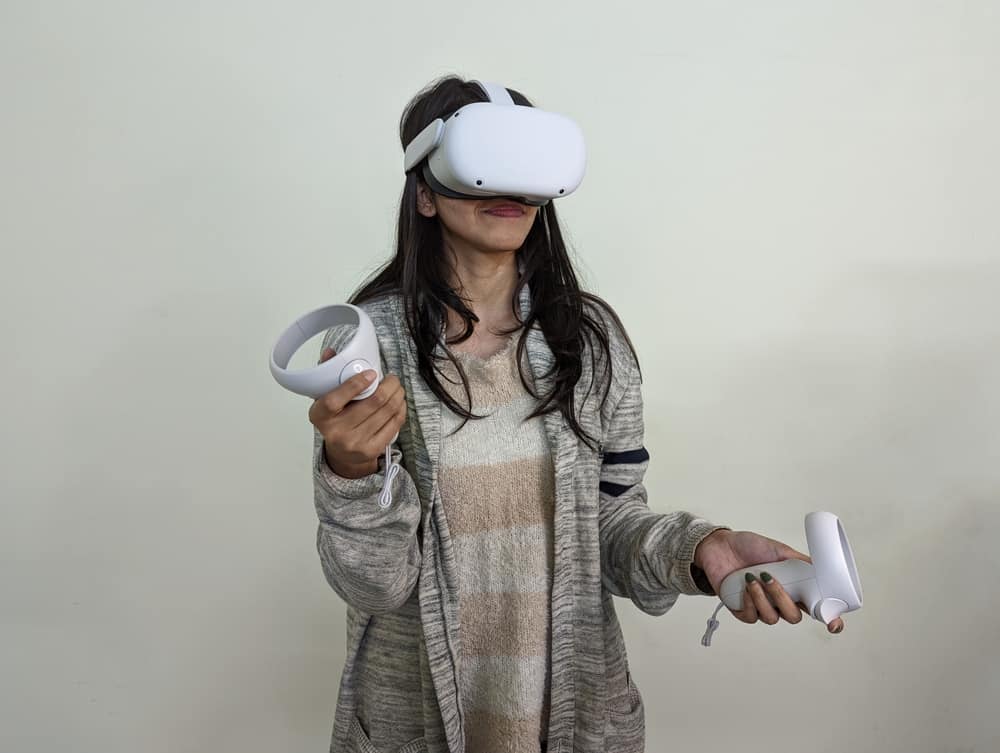 This gadget doesn’t have strong batteries to sustain heavy gaming for long hours. So, the following are the best ways to prevent your Oculus Quest 2 battery drain.

Quest assets have many gains for gamers. One of them is that you don’t need Wi-Fi to play most games.

Without your knowledge, the gadget might be downloading more updates. Also, so many changes might be taking place behind the scenes.

These updates are unique to your gadget. But the stress remains on the battery power.

This tip won’t save much power but will give you more playing time. It also applies when you are playing a single-player game. Besides, you won’t receive any interruptive messages.

Remember, the method doesn’t apply to games that need Wi-Fi. These games include Gun Raiders and Population One.

The Quest gadget comes with some fantastic internal settings. The adjustments are like disabling the auto-wake aspect.

Such an aspect prevents your gadget from coming on if you don’t switch it on. You can also adjust the auto-sleep timer to the shortest time.

Besides the auto-sleep, you can change some gameplay settings. They entail the screen’s 120 Hz refresh rate being off. Such a feature takes a lot of battery power from the Quest 2.

You can find the settings in the experimental tab. If the 120 Hz gameplay is on, turn it off. There will be less stress on your battery.

It allows your Quest 2 to rest. The battery will save more power. If you make it your habit, the item’s battery will have a long life.

3. Switch it off when not in Use

The Oculus Quest 2 is like most fun gadgets. If you aren’t using it, you should switch it off.

Don’t place it in rest mode. Press and hold down the power button.

You’ll see the indicator light on the headset turn off as you hear the power off tune. The asset’s battery can keep any energy left after the play.

Sometimes, during short breaks, could you place it in rest mode? Ensure you close all the games and apps running in the background.

Remember, these running apps take up a lot of power. Once you turn them off, you’d have taken the burden off the battery.

4. Charge it Using the Official Charger

Most gaming or VR items prefer you charge them using their genuine cable. The same applies to the Oculus Quest 2.

Remember, you can still use any USB-C cable to power up the VR asset. But the company, Meta, urges users to charge it using their cable.

It helps the gadget charge at the proper time. Also, the battery will have no heating issues. So, it will help you have fun for a long time without asking for a recharge.

This trick has the best maximum battery output. Focus on keeping the headset’s battery life on a good trail. It will save you the cost of replacing it every moment.

5. Unplug it once the Charge is Full

Like with any other electronic device, unplug your gadget from the charger once it’s complete. If you leave it to overcharge, the battery will lose its holding power.

Yes, sometimes, you can forget and let the asset overcharge. But if you do it often, your gadget’s battery will be at a higher risk of losing its life.

The best trick is to use a timer as you charge. Please focus on the battery’s charging time before it gets full.

Most Li-ion batteries lose their power inside when you overcharge them. It comes from the extra heat the energy will create in the battery.

Would you love to get the best gaming experience with this VR gadget? Then, invest more in genuine batteries from Meta.

It saves you the hustle of recharging them every moment. While you enjoy your favorite game, your main battery will be safe.

Once the gadget gives you the low battery warning, switch it off and remove the battery. Then place the spare one and recharge the main one.

Get the extra batteries by buying the Oculus Quest Elite Strap. It comes with one more battery.

The added battery gives you three more hours of battery life. There will be fewer worries about battery damage even after long gaming hours.

You’ll also get a more comfortable head strap. It helps in proper weight distribution across your head.

That’s not all; the Elite Strap has a power monitor. You’ll know how much charge is on your batteries and strap.

The Oculus Quest 2 is a standalone gadget. But sometimes, you can connect the device to your PC and play more games.

You can play such games through the Oculus Link. Note that gamers don’t recommend you play while you have plugged the gadget into your PC. It’s an exception for Oculus 2.

Connect the gadget to your PC using the genuine Oculus Link cable. Using other cables doesn’t give your device enough power to replace the battery drain.

The Link cable connects you to the game and allows the asset to get a little charge. Still, your battery will have extra gaming hours before its internal battery dies.

Your Oculus Quest battery can last from 2 to 3 hours. That relies on your usage and how you handle it.

But before it dies, you can retain it through the tips in this article. One of the best things is getting an extra battery strap.

So, if Meta makes the Oculus Quest 2 with a better battery power, will it be the best VR gadgets? Feel free to tell us your views.