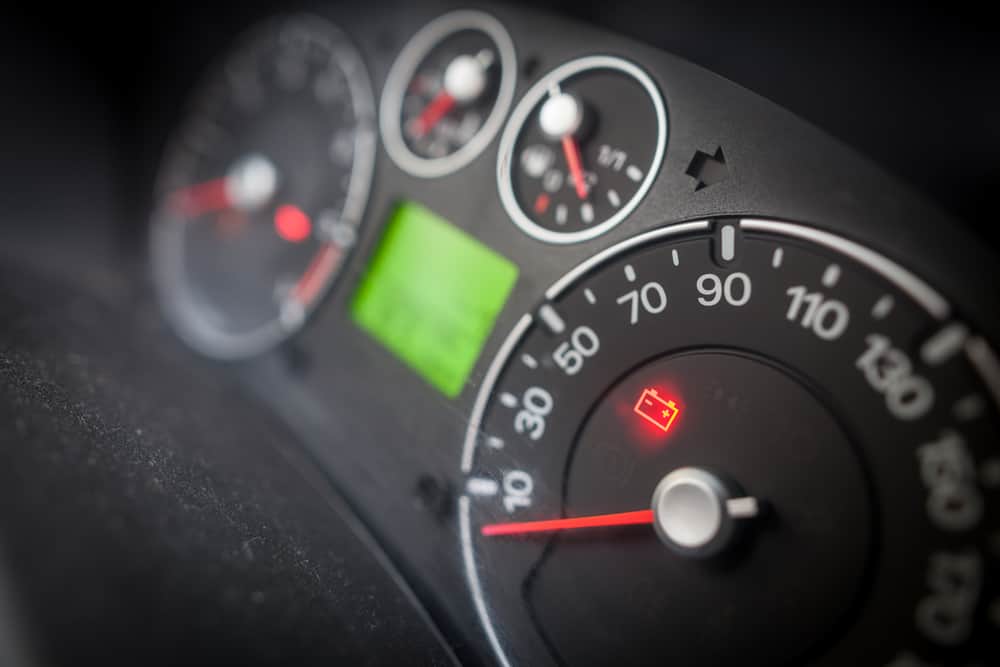 Does your battery light stay on while you drive? If yes, then do not ignore this important sign!

All cars today are powered up by a rechargeable battery. The status of this battery is indicated by a small, battery-shaped light on the dashboard. When you start the car, the light turns on for a few seconds.

However, it will go away as you drive the car. If the light stays on (even when the alternator is charging fine), there might be some serious underlying issue.

In today’s post, we will have a closer look at the situation – the battery light is on but the alternator is charging. From causes to fixes, we will discuss everything to understand why it occurs and how you can resolve it. Let’s get started!

Link Between Alternator and Battery

When asked what powers up the car, most of us would answer – the battery. This answer is partially true.

It’s because the built-in recharging system of a car has several components. The battery only provides the initial energy for the engine to start. Once it starts, the battery needs more energy to keep it running.

Both of these work together to produce the total power required. An alternator (previously called a generator) won’t start without the battery, and the battery won’t charge without the alternator.

What Does the Red Battery Light Mean? 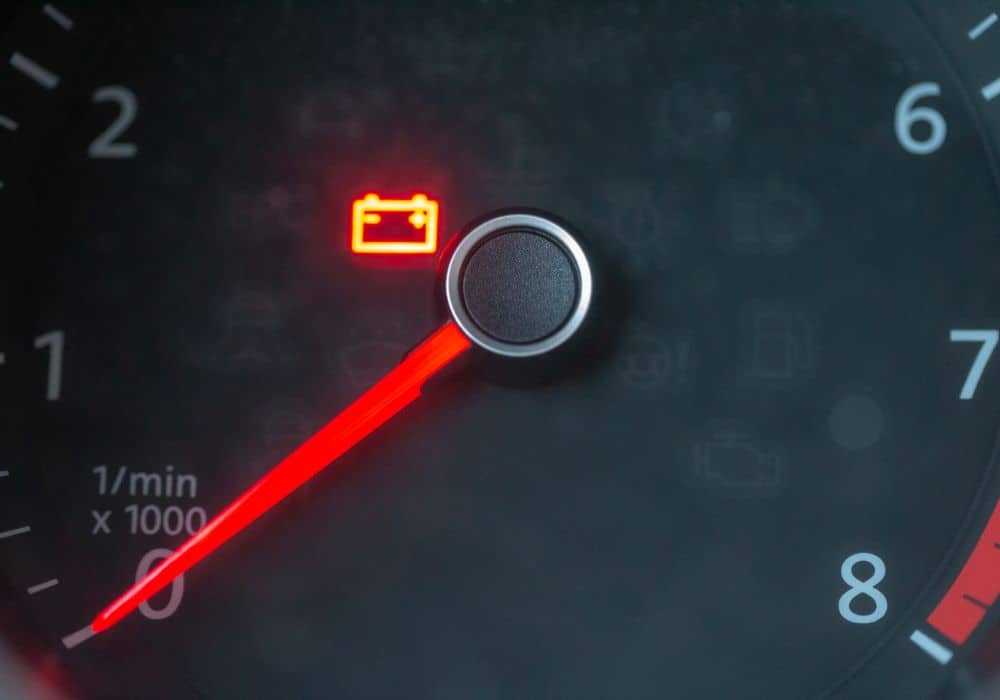 Since the recharging system of the car (especially the alternator) is so crucial, there is a light on the dashboard to keep you aware of its condition. When this red light starts blinking, it means the alternator isn’t charging correctly and there’s low voltage.

The voltage of a fully-charged battery is 12.6 volts. With the alternator charging, the battery voltage should be between 13.5 and 14.5 volts. You can check whether the alternator is charging fine by a simple voltage test.

For this, you will only need a digital multimeter or voltmeter.

Why is Your Battery Light On But the Alternator Is Charging?

If the battery light remains on even when the alternator is charging fine, you should be very alert. This means there’s an issue with the alternator, battery, or built-in voltage regulator.

One of the most common reasons is a cracked or broken alternator belt. This occurs mainly because of old age. With time, the rubber belt becomes dry and less flexible.

So, when used, the tension and stress cause the belt to develop cracks. The battery light will start blinking intermittently to indicate this problem. You’ll also notice issues with the ignition system and headlights.

The cracks will eventually lead to the alternator pulley or belt becoming loose. When the engine becomes cold, you’ll notice a loud squealing sound. You’ll also begin to notice visible cracks and damages on the belt.

If left untreated, the faulty alternator belt will eventually break. The car won’t start at all, and if the belt breaks while you’re driving, the engine would suffer serious damage. Other reasons why an alternator belt may break include a misaligned belt, poor installation, and a faulty pulley.

There are several issues in the battery that can cause the red battery light to stay on while the alternator charges. Here are the most commonly-experienced ones:

Corrosion is a natural process that occurs in all electrical components, including the battery terminals. However, sometimes, the process speeds up due to heat and overcharging.

In both conditions, the temperature of the battery rises. Since a car battery has electrolytes, the increased temperatures cause them to emit from the top of the battery and accumulate at the terminals. You’ll notice a greenish-white residue on the corroded battery terminals.

When this happens, the battery will lose its electrical conductivity efficiency. The alternator won’t be able to charge properly either. As a result, the battery light will start blinking on the car’s dashboard.

Similar to corrosion, the collection of dirt and grime around the battery terminals blocks the pathway of charges. The alternator isn’t able to power the battery as efficiently as it does. This leads to a low voltage.

There are a lot of cables inside the recharging system. It’s possible for them to wear out and become damaged over time. Hence, the bad electrical connection impacts the transmission of charges negatively.

Sometimes, the reason behind the red battery light is as simple as loose clamps. They are attached at the terminals to assist the electrical charge transfer and hold the wires in place. When these connectors are loose, the connection between the cords and the battery becomes poor.

Car batteries have an average lifespan of 4 to 6 years. But they may last longer depending on how you use and maintain them.

Typically, the car battery becomes weak after the first 2-years of use. You will start noticing longer start times and reduced performance. It is when the battery light will flash periodically.

If you keep ignoring it, the battery charge will eventually go to zero, and it will no longer function.  It will become an expired or dead battery.

The alternator misunderstands the commands provided by the faulty regulator and delivers excessive power to the battery. This results in overcharging and corrosion. It can also lead to complete battery damage.

What Are The Possible Fixes? 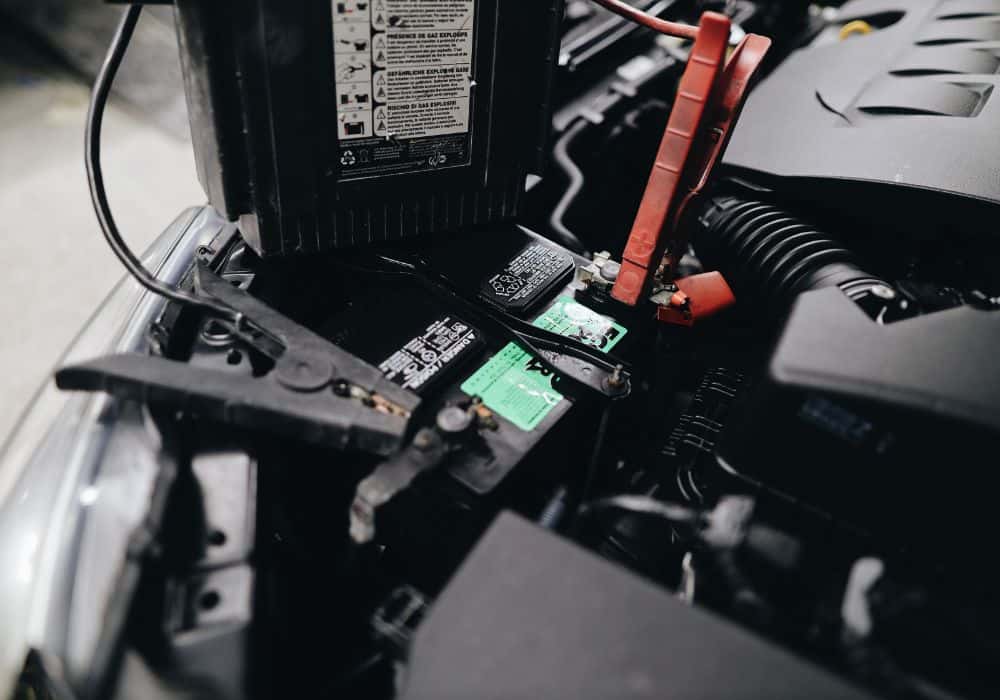 There’s no solution for a bad alternator belt, faulty voltage regulator, and dead battery. You’ll have to find replacement parts to get the car in good condition again. However, there are fixes for most of the battery problems.

You can restore the battery terminals by cleaning the grime and corroded parts. Here’s how to do it:

The type of issue in wires may require a different solution. You may need to cut, solder, or even extend the cables. We recommend you seek a professional’s advice in this case.

You can make the battery clamps tight again using a wrench. Make sure you pick the appropriate size and wear thick protective gloves before doing so. It’s best if the car and the battery are turned off before you do this.

What To Do If Battery Light Is On While Driving? 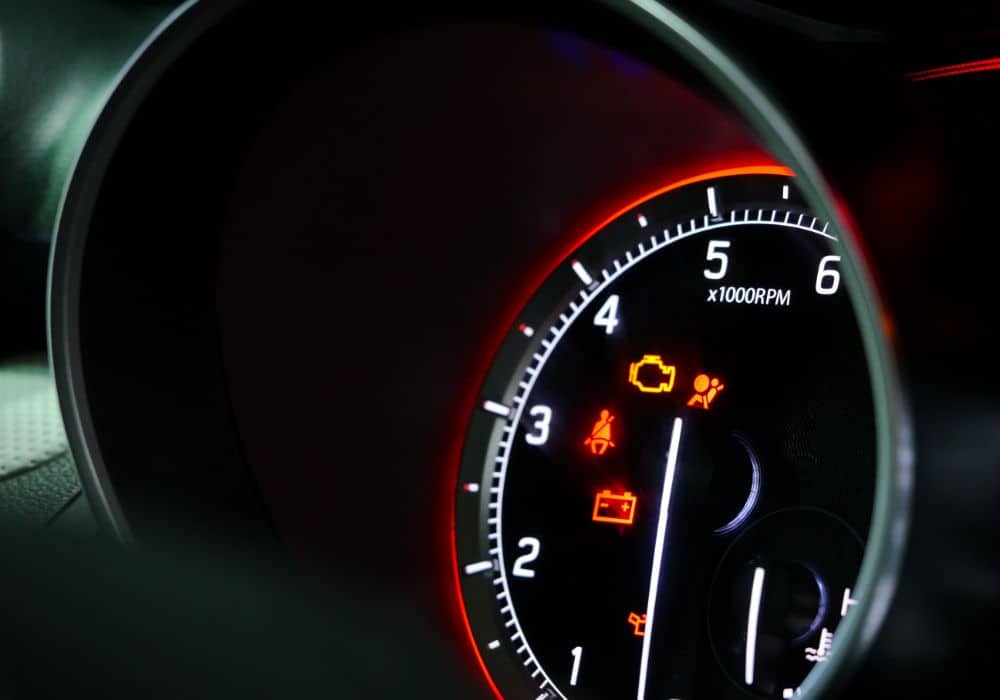 A battery light that blinks periodically while driving isn’t dangerous. You can continue to drive until you’ve reached the nearest service shop or your home.

However, if the battery light remains on while driving, this could be a serious issue, as discussed above. Instantly, drop the car at the mechanic. You can drive for a maximum of 30 to 50 minutes.

So, if you feel like the distance to a repair shop is longer, find a suitable stop and call the expert at your place. Of course, they will charge higher for this immediate service. But it will save you all the trouble and risk of permanent battery damage. If you neglect the issue, the car battery will become dead and unusable.

1. Will the battery light come on if the alternator is overcharging?

Yes, the battery light will come on if the alternator is overcharging. You can further confirm the issue by conducting a simple multimeter test.

2. Does the battery light always come on when the alternator is bad?

Yes, the battery light will come on when the alternator is bad. But in most cases, the reason behind the red light is not always the alternator. Sometimes, the issue is in the battery or the built-in voltage regulator.

3. Can a fuse lead to the battery light staying on?

Yes, the blown fuse may cause the battery light to come on in cars. The fuse usually blows up when there’s a serious wiring or electrical problem.

4. What are the symptoms of a failing voltage regulator?

A failing voltage regulator will show most of its symptoms through the headlights. They will flicker by fluctuating between bright and dim lights. Or the high beams won’t function as brightly as expected.

All in all, there are 3 main causes why your battery light is on but the alternator is charging. These include:

If your battery light stays on when the alternator is charging, identify the cause immediately and find solutions to fix it. You don’t want to deal with a dead battery or alternator replacement.

Or do you think that is a better option? Let us know your comments!